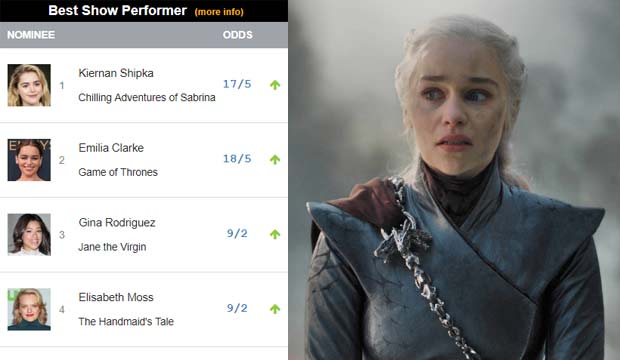 “Game of Thrones” ended its eight-season run on Sunday night, May 19, but the war isn’t over for HBO’s epic fantasy. It has four battles to fight at the upcoming MTV Movie and TV Awards: Best Show, Best Performance in a Show (Emilia Clarke), Best Hero (Maisie Williams) and Best Fight (Williams vs. the White Walkers). Perhaps surprisingly, “Thrones” has never won since TV series were first included in these kudos in 2017. Will the MTV fans who vote for the winners online finally bend the knee for Daenerys?

Clarke was nominated for Best Performance in a Show in 2017, but lost to “Stranger Things” star Millie Bobby Brown. Then Clarke contended for Best Hero in 2018, but that prize went to Chadwick Boseman as the title character in “Black Panther.” Maybe that’s why Dany turned to the dark side. The populace didn’t vote for her, so she torched the populace. Maybe that was a rash decision, though; I don’t think the residents of King’s Landing even get MTV.

Either way, Clarke’s nomination for Best Hero last year turned out to be a little premature, but this year she’s up for Best Performance in a Show again. Will this finally be her year? Hundreds of Gold Derby users are already predicting the MTV Movie and TV Award winners (make or update your own predictions right here), and according to their forecasts, it’s going to be close. Kiernan Shipka (“Chilling Adventures of Sabrina“) has the narrow advantage as of this writing with leading odds of 17/5, but Clarke is right behind her with odds of 18/5 and the support of the majority of our All-Star Top 24 Users who got the highest scores when you combine the last two years’ predictions.

So what do you think? Will Clarke burn her competition to the ground, or will Shipka cast a spell?