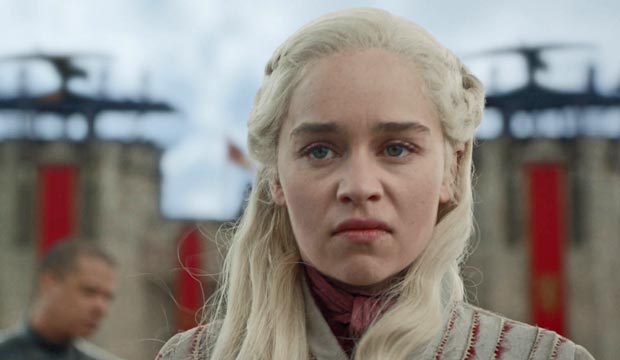 Flamboyant villain roles give actors opportunities to sink their teeth into juicy material, which is how performers like Bryan Cranston (“Breaking Bad”), Margo Martindale (“Justified”) and John Lithgow (“Dexter”) won Emmys even when their characters were unlikable. So we asked our readers which of this year’s nominees is likeliest to win for playing a baddie. It was a close vote, but Best Drama Actress nominee Emilia Clarke came out on top for her role as Daenerys Targaryen on “Game of Thrones.” Scroll down for the complete poll results.

Of course, Dany wasn’t always a villainous role. The morally complex Mother of Dragons liberated slaves, helped defeat the Night King, and rescued her future lover — and future nephew — Jon Snow (Kit Harington) from a zombie attack in the north. Whether she’s really a villain at all even after the events of season eight is up for debate since the writers transformed her so abruptly that it caused a backlash. But I think the moniker applies after she burned King’s Landing to the ground for no particular reason. Once the Breaker of Chains, this time she liberated the peasants right out of existence.

Clarke received a leading 37% of the vote as the villain likeliest to win. She’s up for Best Drama Actress after three previous nominations in the supporting category (2013, 2015-2016). “Thrones” has 10 acting nominations overall this year, more than any other program, so it sure seems to have support from the actors branch of the television academy. But thus far the only actor who has ever won for the show is the decidedly less villainous Peter Dinklage, who claimed Best Drama Supporting Actor in 2011, 2015 and 2018. So is there hope for the Breaker of Chains to break that Emmy curse? Check out our poll results below, and make your Emmy predictions here. 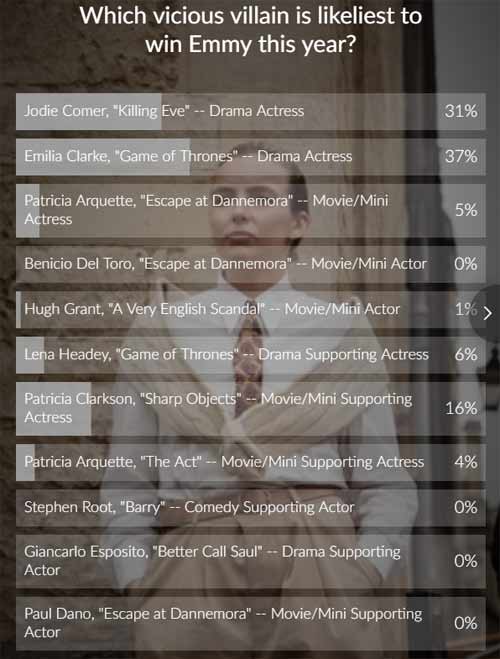 MAKE YOUR PREDICTION: Who'll win Emmy for Best Drama Actress?
To save your prediction, you must log in to Gold Derby. Click here to sign in with existing account -- or create a new one.
PREDICTthe Emmys now; change them until September 22