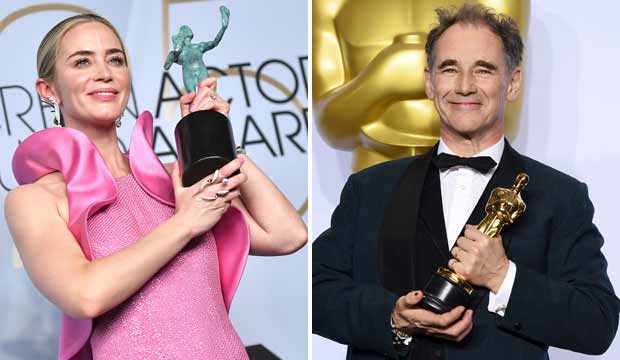 The Oscar race for Best Supporting Actress has seemed like a crapshoot for weeks, but the view got even hazier after the SAG Awards on January 27. The Screen Actors Guild honored Emily Blunt (“A Quiet Place”), who isn’t even nominated at the Oscars. As unusual as that outcome was, it’s actually reminiscent of another equally turbulent race: Best Supporting Actor in 2015. That year it was the BAFTAs that finally showed us which way the wind was blowing. Could the Brits guide us again this year?

The parallels with 2015 are striking. The early front-runner was Sylvester Stallone (“Creed”), who won at the Golden Globes and Critics’ Choice Awards, just like Regina King (“If Beale Street Could Talk”) this year. But then he was snubbed at the SAG Awards and BAFTAs, just like King. And then the SAG Awards were handed out and the prize shockingly went to Idris Elba (“Beasts of No Nation”), whom the Oscars snubbed, just like Blunt.

So who to predict for Oscars? In 2015 Mark Rylance (“Bridge of Spies”) ended up winning at the BAFTAs, but that was his first major victory of the season, so most of us still thought Stallone would win the Oscar — we were wrong. Rylance prevailed at the Oscars too.

Sound familiar? King is still the Oscars front-runner in our odds despite her SAG and BAFTA snubs, like Stallone was. If history repeats itself, then King should watch out for whoever wins at the BAFTAs. They could follow Rylance by staging a last-minute Oscars ambush.

As of this writing our BAFTA odds favor Rachel Weisz (“The Favourite”) to win Best Supporting Actress, which makes sense since she’s one of the only two British actors in the category and she co-stars in the most nominated film. But what might have made the BAFTAs seem like an outlier now might turn out to be prophetic, making Weisz the woman to beat at the Oscars too. The favorite indeed.