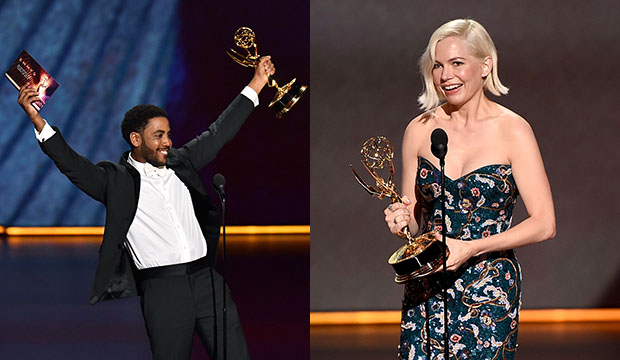 Sunday’s Primetime Emmy Awards was an evening of exciting wins, great fashion and, of course, great speeches. The speeches spanned the emotional spectrum from being genuinely heartfelt and touching to absolutely hilarious and full of wit. With the ceremony now in the rearview mirror, let’s take a look at the five best acceptance speeches we heard during the show.

Comedy Supporting Actress: Alex Borstein, “The Marvelous Mrs. Maisel”
Borstein gave one of the best speeches last year and she followed it up with another knockout this year. She started by taking a swig from a minibar bottle with her “Family Guy” co-star Seth MacFarlane and then built on her material from last year by saying that she wasn’t wearing underwear and that her seat should be destroyed. She then brought up her mother and grandmother, both immigrants, and her grandmother who escaped being shot by a guard when she stepped out of line. Borstein then said, “Step out of line, ladies!” Immediately the saying started trending on social media.

Drama Actor: Billy Porter, “Pose”
The fabulous actor, who wore an outfit and hat to match, invoked his character, Pray Tell, by declaring, “The category is LOVE!” Porter, who became the first openly gay black man to win the category, quoted James Baldwin by talking about how he filtered out all the “filth” he had been taught to hate about himself before “I could walk around this Earth like I had the right to be here. I have the right. You have the right. We all have the right!” He ended by saying that artists have the power to change “the molecular structure” of people’s hearts and minds and implored the audience, “Please don’t ever stop doing that. Please don’t ever stop telling the truth!”

Movie/ Mini Supporting Actress: Patricia Arquette, “The Act”
Rather than use her piece of paper that she has relied on for years, the Oscar winner spoke from the heart. She thanked the people who worked on “The Act,” including co-star Joey King, whom she referred to as “my beauty.” Then things got more somber when she invoked the memory of her deceased sister, Alexis Arquette. Alexis, a trans actress, passed away in 2016 of a heart attack. Arquette expressed the grief in her heart and said that we need to change the world to be more accepting of trans people and called for employers to hire trans people to work for them.

Movie/Mini Actor: Jharrel Jerome, “When They See Us”
The 21-year-old took the stage to a standing ovation and started by saying, “I feel like I should just be in the Bronx right now… waiting for my mom’s cooking or something.” He thanked his mother again and his family who were in the audience and the guidance he received from director Ava DuVernay. He then gave the biggest shout-out to the Exonerated Five, whose story the series dramatized. The men, Antron McCray, Kevin Richardson, Yusef Salaam, Raymond Santana, and Korey Wise (whom Jerome portrayed), stood up to be recognized and received a standing ovation from the crowd in the Microsoft Theater.

Movie/Mini Actress: Michelle Williams, “Fosse/Verdon”
Williams, who won for playing actress Gwen Verdon, said that the win was “an acknowledgment of what is possible when a woman is trusted to discern her own needs, feels safe enough to voice them, and respected enough that they’ll be heard.” She explained that her bosses trusted her when she asked for more dance classes so she could do her job better. She thanked FX for paying her equally and made an impassioned plea to employers to listen to and believe women when they ask for the tools they need to succeed.