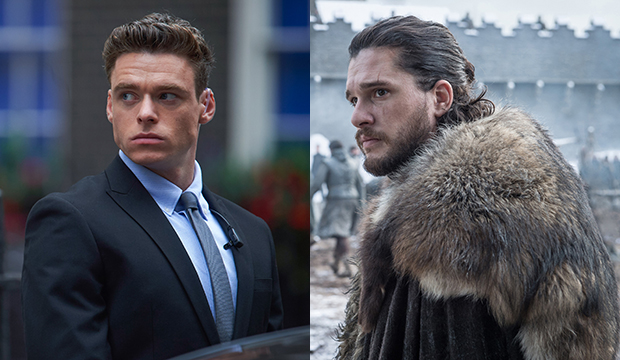 Jason Bateman (“Ozark”), Bob Odenkirk (“Better Call Saul”), Sterling K. Brown (“This Is Us”), Richard Madden (“Bodyguard”), Milo Ventimiglia (“This Is Us”) and Kit Harington (“Game of Thrones”) are the predicted six Best Drama Actor Emmy nominees in our early odds. But when you’re making or updating your picks, you may want to go with one of the following two for the win: Madden or Harington. This has nothing to do with their work (especially since Harington’s is still unseen) or their “Game of Thrones” connection, but what’s been occurring in this race the past eight years: The winner has come from a first-year show or a final-year show.

SEE ‘Game of Thrones’ final season trailer: Death has many faces, but will anyone survive the battle? [WATCH]

Of our predicted top six, only Madden and Harington fits this mold. The former is coming off a Golden Globe win for the breakout first season of “Bodyguard,” while the latter will bid adieu to Jon Snow with the eighth and final season of “Game of Thrones,” which premieres April 14. The other four are all in the middle of their shows’ runs: Screen Actors Guild Awards champ Bateman is competing for the second season of “Ozark”; Brown and Ventimiglia, Season 3 of “This Is Us”; and Odenkirk is hoping to return to the field for the fourth season of “Better Call Saul” after the show skipped last year’s cycle.

Madden has never been nominated for an Emmy before, so he’ll need to duplicate what Lewis, Daniels and Malek did: win on his first try. (Brown won the previous year for “The People v. O.J. Simpson: American Crime Story,” so he was 2 for 2.) Harington was nominated in the supporting category in 2016, but lost to his co-star Peter Dinklage, who is the only “Game of Thrones” actor Emmy voters want to reward. Last year, Harington and Emilia Clarke submitted in lead, but both were snubbed, so he’s by no means safe for a spot.

Neither is Madden. He could turn out to be one of those Globe winners who never catches fire with the Emmys (like Billy Bob Thornton in “Goliath” or Ruth Wilson in “The Affair”). Plus, he’s not the only person on a first-year show in the running: Brian Cox (“Succession”), Billy Porter (“Pose”) and Stephan James (“Homecoming”) are all in our top 10.