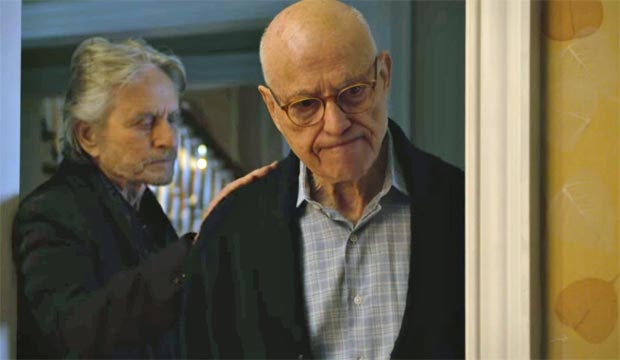 Alan Arkin is just an Emmy win away from the Triple Crown of Acting. The veteran actor earned an Oscar for his supporting role in “Little Miss Sunshine” (2006) and a Tony Award in 1963 for his featured role in “Enter Laughing.” This year, he is nominated as Best Comedy Supporting Actor for his role as talent agent Norman Newlander on Netflix’s “The Kominsky Method.” Arkin has submitted the episode “Chapter Two: An Agent Grieves” for Emmy consideration.

The episode centers around Norman planning a funeral for his wife Eileen (Susan Sullivan) after she has died of cancer. Though devastated by his wife’s death, Norman enlists his best friend and client Sandy Kominsky (Best Comedy Actor nominee Michael Douglas) to carry out Eileen’s final wishes. Eileen leaves specific directions for her funeral, including having a casket made of reclaimed wood from a sunken ship. Norman endeavors to follow Eileen’s request, but he is simultaneously furious that their estranged and drug-addicted daughter Phoebe (Lisa Edelstein) never bothered to visit her mother during her illness.

Eileen’s funeral goes off exactly as planned, complete with a musical performance by Patti LaBelle, a comic eulogy by Jay Leno and a Barbra Streisand impersonator delivering a note-perfect rendition of “The Way We Were.” The funeral ends with Norman delivering an emotional eulogy to his wife, which is interrupted by the sudden appearance of a scattered and possibly intoxicated Phoebe.

Can Arkin join the Triple Crown club by winning an Emmy this year? Let’s examine the pros and cons of his submission.

Arkin gives a performance tailor-made for Emmy voters. Arkin conveys Norman’s grief while still giving a mostly comic performance full of sarcastic one-liners about technology, death and troublesome urine streams. He also ends the episode with a long monologue in which Norman eulogizes his wife. The speech is moving, funny and a textbook example of emotional impact.

Arkin has earned five Emmy nominations over the past 50 years, but has never won. As the only Oscar winner in the category, his status as an overdue veteran can only help him.

This category in particular tends to recognize big comic performances. Arkin’s more nuanced work here may be too subtle for Emmy voters.

Arkin is the only nominee in this category whose show is not nominated for Best Comedy Series. Arkin’s chances could be hurt by the lack of widespread support for his show.