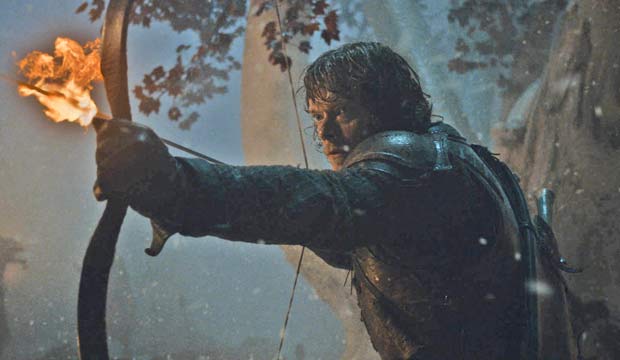 HBO decided to submit just a few cast members on the Emmy ballot this year, but Allen (along with co-stars Gwendoline Christie and Carice Van Houten) decided to submit themselves, paying the $200 submission fee and keeping their fingers crossed. It turned out to be a smart move, as all three ended up nominated for the show’s final season.

Allen’s episode submission is “The Long Night,” in which the living make a last ditch effort to defend Winterfell against the army of the dead. After years as an outsider and then as tortured slave “Reek,” Theon Greyjoy returns to the fold to atone for his past sins, valiantly sacrificing his life while defending Bran (Isaac Hepmstead Wright) against the Night King. Afterwards the Night King is defeated as Arya (Maisie Williams) stabs him with her Valyrian steel dagger, shattering him and his White Walkers in the process.

Allen is one of the only freshman nominees in the category this year, as he competes against three-time winner and co-star Peter Dinklage, past nominees Jonathan Banks (“Better Call Saul”), Nikolaj Coster-Waldau (“Game of Thrones”), Giancarlo Esposito (“Better Call Saul”) and Michael Kelly (“House of Cards”), plus fellow rookie contender Chris Sullivan (“This Is Us”). Can Allen surprise us again by winning on Emmy night? Below, we take a closer look at the pros and cons.

DISCUSS2019 Emmy Awards with our fun and friendly forum posters

Allen’s episode may trigger a visceral response in voters. He has a strong rooting factor, as Theon dies bravely in battle after years of being an outsider, a victim, sometimes a villain, and a coward. It’s a fitting end for Theon, who finds redemption on the battlefield. Allen infuses his character with pathos, showing that despite his difficult past, he was finally prepared to pay the ultimate price by selflessly throwing himself into battle against the Night King.

Although Allen’s climactic death scene is one of the more memorable moments from the show’s final season, his overall screen time during this episode, and in season eight as a whole, was relatively brief. His character was never the focal point of the storyline, so once Theon meets his demise there may have been a degree of “out of sight, out of mind” for viewers with regard to his character. Does Allen make enough of an impact to beat out his fellow nominees?

Vote-splitting is likely going to be Allen’s biggest obstacle on Emmy night. He’s up against two other contenders from his show (Coster-Waldau and Dinklage). The same might be said for Banks and Esposito, leaving Kelly and Sullivan the sole representatives from their respective shows, so they won’t have to worry about losing any votes to their co-stars.