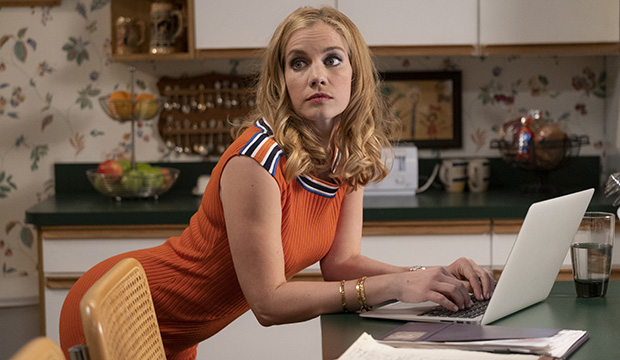 Anna Chlumsky is on her sixth Best Comedy Supporting Actress Emmy nomination for playing Amy Brookheimer, the longtime loyal aide to Selina Meyer (Julia Louis-Dreyfus), on HBO’s “Veep.” She’s been nominated for every season since the show’s sophomore run in 2013, but has yet to win. Can she finally cross the line with her episode submission, “Pledge”?

In the beginning of the episode, Amy is seen in the background as Selina addresses a rally and deals with debate prep. Several colleagues make comments about her pregnancy showing but are also unaware of the fact that she’s scheduled to have an abortion. Her sister is supposed to be her ride, but Amy’s hungover after sleeping with Dan (Reid Scott), so he ends up taking her to the clinic. As she’s about to enter the clinic, she’s confronted by several protesters pleading for her to consider her child’s life. This causes Amy to completely unload on them by calling out their hypocrisies, their motives and lack of correct spelling on their signage.

In the operating room, Amy is eager to get the procedure underway. As she’s put under anesthesia, she becomes uncharacteristically pleasant. After the procedure, she wonders if she’s made a mistake. She then gets a phone call from Teddy Sykes (Patton Oswalt) asking her to come on board Jonah Ryan’s (Timothy Simons) White House bid as campaign manager, leading her to believe she made the right choice.

Will this episode lead voters to finally reward Chlumsky on their final opportunity? Let’s examine the pros and cons.

It may have only lasted a minute, but Amy’s tirade in front of the clinic is the best her character’s been since her meltdown in “Convention” from Season 4. Her calling out the protesters was masterful, only to be made better by her pointing out a person’s misspelled sign.

If vote-splitting is a thing in this category, Chlumsky could be the beneficiary. With two actresses each from “Maisel” (Alex Borstein and Marin Hinkle) and “Fleabag” (Olivia Colman and Sian Clifford), it’s a factor that could very well prove pivotal in this race.

If voters are really eager to send “Veep” off with one last hurrah, Chlumsky could very go along for the ride. She’s the most nominated performer from the show to never get a win.

Even with how memorable her encounter with the clinic protesters is, the amount of screen time Amy has is incredibly short. If she had one extra scene, it would be much easier for her to stand out.

With “Veep” not being able to break a double-digit nomination haul, it’s quite possible that voters have moved on from the show and aren’t feeling the urgency to give Chlumsky her due for the final season.