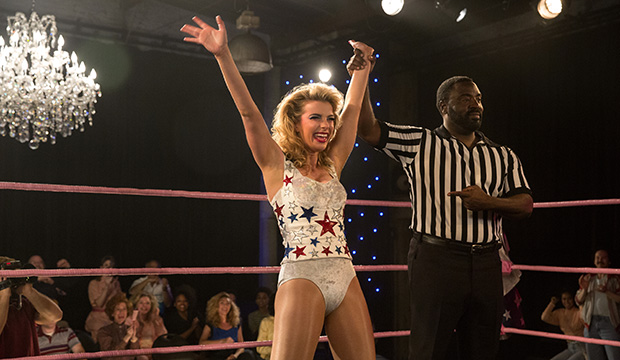 Betty Gilpin wrestled through a highly competitive Best Comedy Supporting Actress field to earn her second consecutive Emmy nomination for playing Debbie Eagan on “GLOW.” Even more impressively, she secured another nomination despite the series dropping from 10 nominations for Season 1 to five for Season 2. Gilpin chose “Mother of All Matches” for her submission to Emmy voters, a strong episode that gives her a lot to do as an actress.

In “Mother of All Matches,” Debbie is struggling with her personal life as her ex-husband’s secretary calls her to ask the make of the bed they shared when they were married. This lights a fire under Debbie as she proceeds to get rid of most of her household items. The only problem is she forgot to pick up her son from daycare in the process. Debbie also fights Tammé (Kia Stevens) in the ring and they bond over the pains of motherhood.

Can Gilpin win with the mother of all matches that is Best Comedy Supporting Actress? Let’s take a look at the pros and cons.

If voters really watch the submitted episode, Gilpin has one of the best in her category. “Mother of All Matches” allows her to show the entirety of her range, from the broad comedy of hamming it up with Tammé in the ring to the more quiet moments of Debbie reflecting on the state of her personal life. Watching Debbie break down and proceed to sell almost everything in her house is at times hilarious and sad in her desperation, and Gilpin walks that fine line very well.

Another factor that might help Gilpin is her being the sole nominee for “GLOW” in the acting categories. In fact, she will be the only opportunity for “GLOW” to win an Emmy on the main telecast, so fans of the series might be compelled to give her a win. Best Comedy Supporting Actress features two instances of possible vote-splitting, between Alex Borstein and Marin Hinkle for “The Marvelous Mrs. Maisel,” and Sian Clifford and Olivia Colman for “Fleabag,” so Gilpin could ride up the middle to victory.

As much as Gilpin being the sole representative for “GLOW” can benefit her, it also hurts her chances overall. All of her competitors have their respective shows nominated in either Best Comedy Series or Best Variety Sketch Series, so there might not be enough support for “GLOW” and Gilpin’s performance over much more beloved shows by the TV academy.

Gilpin not winning last year when “GLOW” was nominated for Best Comedy Series is another indication that she may struggle to amass the necessary votes. Even if voters are split between the women of “Maisel” and “Fleabag,” there are three options besides Gilpin who could conceivably take it, including Sarah Goldberg in the red-hot “Barry,” Kate McKinnon, a two-time winner from “SNL” and a very overdue Anna Chlumsky for “Veep.”