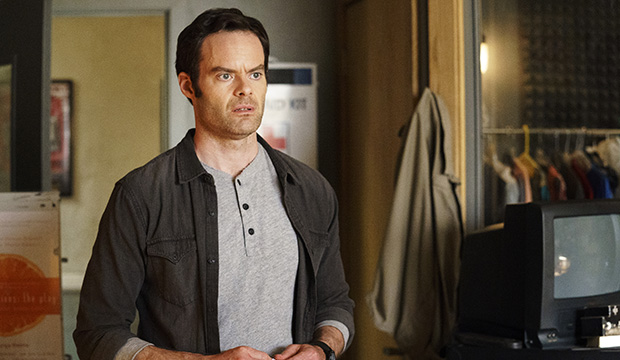 Bill Hader is back to defend his Emmy title for Best Comedy Lead Actor for HBO’s “Barry.” In his quest to win a second consecutive trophy, Hader has submitted the episode “The Truth Has a Ring to It.”

We first see Barry talking with Fuchs (Stephen Root) in the aftermath of the Ronny, Lily and Detective Loach fiasco. Barry tries to break things off with Fuchs after Fuchs betrayed him by wearing a wire. Fuchs tries to reason with Barry, but Barry won’t hear any of it. He tells Fuchs that he doesn’t need him and that Gene (Henry Winkler) understands him, even after revealing what happened at Korengal. Fuchs questions whether Gene would be as understanding if he knew that Barry killed his girlfriend, Janice, and Barry walks away. Barry finishes training the Chechens who are plotting to ambush the Burmese gang that’s attempting to partner with the Bolivians. The Chechens thank Barry with a song and dance, and Hank (Anthony Carrigan) tells Barry the debt has been repaid, but the moment is ruined by an accordion player. One of the young Chechens being trained, Mayrbeck, thanks Barry for giving him a purpose in life.

Back at Gene’s acting class, Sally (Sarah Goldberg) has re-written her scene to reflect the truth about how she handled the abuse she suffered at the hands of her ex, Sam. The class’s initial silent reaction leaves her mortified. Barry asks Gene to help him better channel Sam’s character. Gene tells Barry to use his own dark experiences to find the emotion in Sally’s story. When performing the scene again with Sally, Barry attempts to use the incident in Korengal to channel Sam’s anger. As he’s doing this, he finds himself reliving the act of killing Janice outside Gene’s cabin. Barry channels it and ends up delivering an amazing and terrifying performance in the scene. Sally is much more satisfied with the piece and Gene gives Barry some personal praise for his work.

Can Hader claim gold again for this offbeat killer comedy? Let’s examine the pros and cons.

Hader gives another knockout performance. There might not be anything as devastating as the scene in which he kills his friend like he had last year, but the intensity he has when trying to channel the darkness of Sam’s character is mesmerizing.

The show going from 13 nominations last year to 17 this year shows that the TV academy has truly embraced it and only serves to help Hader in this category.

Other than Barry’s reaction to the Chechen song and dance that’s being used to thank him for his services, there’s not much that you could say is laugh-out-loud funny about the performance.

With so much of what Barry is going through being processed internally, it could allow a more bombastic performance to come out on top in this race.