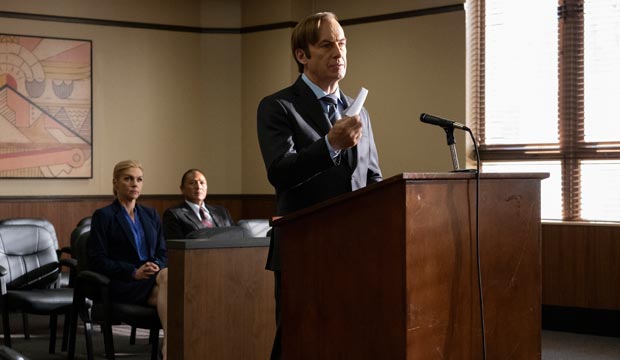 Bob Odenkirk has returned to the Emmy race this year to tack on a couple more nominations to his tally for “Better Call Saul.” The “Breaking Bad” prequel wasn’t eligible for awards in 2018 given its extended hiatus, but Odenkirk’s streak remains intact: he has competed as an actor and producer for all four seasons of the series, which tracks low-level attorney Jimmy McGill’s journey to becoming cartel lawyer Saul Goodman. He hasn’t won yet for “Saul,” but he came to the show with two Emmys already under his belt. He took home variety writing awards for “Saturday Night Live” in 1989 and “The Ben Stiller Show” in 1993, competing two additional times for “SNL” and then three times for “Mr. Show with Bob and David” (twice for writing, once for music and lyrics).

For his Emmy submission this year, Odenkirk has chosen the season finale, “Winner.” In this installment, Jimmy tries to reinstate his law license by expressing public grief over the death of his brother, Charles (Michael McKean, who pops up in a flashback). Hoping to bring esteem back to the McGill name, he interviews aspiring law school students for scholarships. It all culminates in an emotional speech to the bar association, where he vows to honor his late brother by being a better attorney. But it all turns out to be a con, much to the shock of his girlfriend, Kim (Rhea Seehorn).

Can Odenkirk finally win for this episode? Let’s take a look at the pros and cons:

After four unsuccessful bids in the category, Odenkirk is overdue for recognition in Best Drama Actor. Last year’s winner, Matthew Rhys (“The Americans”), is out of the running since his show concluded last year, so there’s room for a new champion, be it previous champ Sterling K. Brown (“This Is Us”), prior nominees Jason Bateman (“Ozark”), Kit Harington (“Game of Thrones”) and Milo Ventimiglia (“This Is Us”) or first-time contender Billy Porter (“Pose”). Being overdue could give him a leg-up in a wide-open race, especially since he has accumulated more nominations in this category than any of his rivals, without a win.

With “Winner,” Odenkirk beautifully navigates the tragic fulfillment of Jimmy’s destiny, playing to our emotions with a powerful monologue before pulling the rug out from under us in the most shocking way possible. Even hardcore “Breaking Bad” fans who have always known where this story is headed may find themselves wishing he’d taken a different path, a testament to the actor’s skills as a performer in eliciting our sympathy for his morally corrupted character.

Though “Better Call Saul” has racked up a lot of nominations over its four seasons (9 this year for a grand total of 32 overall), it’s never actually won anything, unless you count its 2017 victory in Best Short Form Series for “Los Pollos Hermanos Employee Training.” In a year when any show that isn’t named “Game of Thrones” will have a hard time snagging any gold (the HBO juggernaut has a record 32 nominations this year), this respected favorite might go home empty handed yet again.

With a new season on the horizon, is there much of a rush to reward Odenkirk? Perhaps voters will want to bide their time until the eventual grand finale, choosing to take care of some other contenders in the meantime.