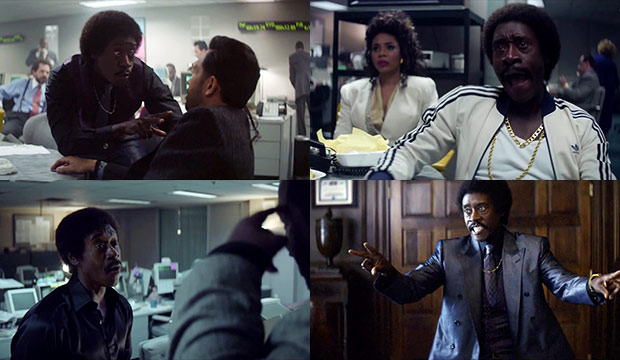 Cheadle plays Mo Monroe, the fictional founder of a Wall Street trading firm in the late 1980s. He has entered for consideration the pilot, which was co-directed by fellow executive producer Seth Rogen and co-written by “Happy Endings” creator David Caspe. The episode is titled “365” because it picks up 365 days before the historical “Black Monday” stock market crash that is in the opening teaser. Let us take a closer look at this submission:

“Black Monday” is the perfect follow-up for fans of “House of Lies” who have missed Cheadle arrogantly and rapidly spewing demeaning vulgarities to assert himself as the smartest guy in the room while he manipulates others in the pursuit of excessive wealth. This is another satire on debauchery that constantly reminds its viewers with drugs, money, profanity and sex that they are watching premium cable. Between the period-appropriate afro and athleisure, as well as Mo’s loose morals, Cheadle cannot be mistaken for playing himself. It is a heightened performance with fast-talking and much gesticulating.

Despite having won two Golden Globes, as well as two Screen Actors Guild Awards as part of film ensembles, Cheadle has never been singled out by his peers for an individual industry award, having amassed nine Emmy nominations, two BAFTA nominations and one Oscar nomination for eight roles since the 1990s. Voters could be inspired to pay their respects when the “Black Monday” series premiere changes pace for its closing montage. This wordless sequence depicts a forlorn and more grounded Mo that’s hidden under his public-facing macho exterior, demonstrating the dramatic range that has long earned Cheadle acclaim.

The show’s brash brand of humor is not for everyone and yielded mixed reviews in line with those for the similarly boisterous “House of Lies,” which Cheadle also executive-produced. That show picked up five Emmy nominations over its five-season run and Cheadle similarly represents the only nomination for “Black Monday.”

Of the 32 lead, supporting and guest acting winners in 2018 and 2019, only Regina King of “Seven Seconds” was able to win last year without her show having a nomination in a Best Series — or any other — category. And she was already a two-time Emmy winner by that point. Based on its Nielsen and IMDb ratings, “Black Monday” might have been the least-watched show to be nominated for a major Primetime Emmy.