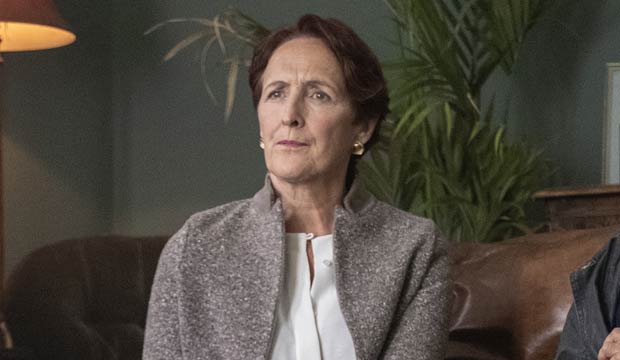 After two Olivier Awards and a Drama Desk Award, plus a Tony nomination (for “Medea,” 2003), Irish actress Fiona Shaw has now arrived at the Emmys with not one but two nominations: Best Comedy Guest Actress for “Fleabag” and Best Drama Supporting Actress for “Killing Eve.” In the latter, she plays Carolyn Martens, the erudite yet inscrutable head of the Russian Section at MI6, who proves to be a master manipulator in the second season of the darkly comedic BBC America drama. For consideration, she’s submitted the season’s second outing “Nice and Neat” to voters, which is also showrunner Emerald Fennell’s nominated episode in the writing category.

In this episode, aware of Eve’s (Sandra Oh) ongoing cat-and-mouse game with psychopathic assassin Villanelle (Jodie Comer), Carolyn introduces her as an outside expert on female assassins to her new MI6 covert working group called Operation Manderlay. In the wake of Alistair Peel’s death, Carolyn and Eve pay a visit to his two adult children, Aaron (Henry Lloyd-Hughes) and Amber (Shannon Tarbet), to inform them that their father didn’t die of a heart attack but was murdered.

Meanwhile, Villanelle tricks a strange man, Julian (Julian Barratt), into taking her in while she heals from her stab wound, but she ends up trapped in his house. Carolyn pinpoints Villanelle’s whereabouts by tracing a phone call that Villanelle places to her emergency contact within the Twelve, so she quickly pulls Eve out of a briefing to investigate. But when they arrive at the scene all they find is Julian’s dead body and no sign of Villanelle.

That’s when Carolyn suggests protection for Eve. She brings Eve to her London house, where she has a surprise waiting for her on the couch: Konstantin (Kim Bodnia), alive and well after he was presumed dead from being shot by Villanelle in the season one finale.

Will the one-two punch of Emmy performances carry Shaw across the finish line for “Killing Eve”? Let’s dive into the pros and cons:

Shaw could pull an Ann Dowd, who won the Best Drama Supporting Actress Emmy for “The Handmaid’s Tale” in 2017 presumably boosted by her Best Drama Guest Actress nom for “The Leftovers.” Like Dowd, Shaw is a respected veteran actress with many credits under her belt, including the “Harry Potter” movies and “True Blood,” but still hasn’t gotten her proper due — at least not in the United States. Voters now have two chances to reward her, and like in Dowd’s case, they may go for the category that recognizes her more prominent role, which would be this one.

Unlike in Comedy Guest Actress where she could split the vote with fellow “Fleabag” nominee Kristin Scott Thomas, Shaw is “Killing Eve’s” sole representation in the Drama Supporting Actress race. Here it’s the four “Game of Thrones” gals — Gwendoline Christie, Lena Headey, Sophie Turner and Maisie Williams — who could cancel each other out. And if they do, it’ll be either Julia Garner (“Ozark”) or Shaw who benefits.

She could also benefit from “Killing Eve’s” overall strength this year. It amassed a total of nine noms, including Best Drama Series. And just recently she won the Best Supporting Actress BAFTA for the show, which is a nice bolster leading up to the Emmys — even though they were acknowledging her for the first season while Emmy voters are considering her for the second.

Carolyn is enigmatic, but is she too closed off for Emmy voters? Shaw effectively channels her stoicism through poignantly dry line deliveries, peeling back some but never too many layers of her character. But Emmy voters tend to gravitate toward showier, more emotive performances. Even last year’s champ in this category Thandie Newton, who plays a robot on “Westworld,” submitted an emotion-laden episode for consideration.

While Shaw pops into her episode several times, she ends up with relatively little screen time overall, and her character has no sustained arc. This could work against her if voters dutifully watch all the submitted episodes, since someone like Williams, who has abundant screen time and a thoroughly satisfying arc across all four “Thrones” submissions, could stand out instead.

Think the Oscar race is between '1917' and 'Parasite' after PGA and SAG Awards? Tell that to 'Moonlight'…