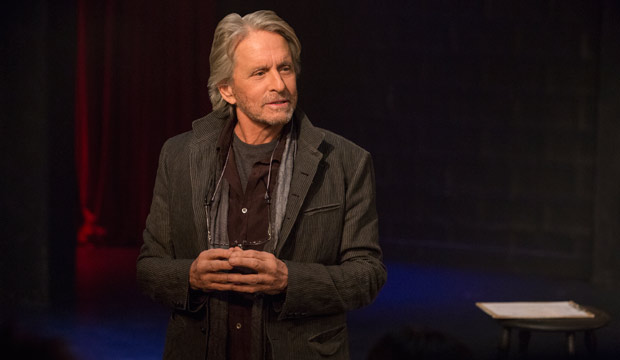 Two-time Oscar winner Michael Douglas made a triumphant return to the small screen with “The Kominsky Method,” his first episodic television series since “The Streets of San Francisco” in 1972-76. The role of Sandy Kominsky, an aging acting coach who enjoyed a brief brush with fame, earned him an Emmy nomination in Best Comedy Actor. He’s now a six-time nominee, having won for his leading performance in the TV movie “Behind the Candelabra” (2013) and competed three times for “The Streets of San Francisco” (1974-76) and once more for a guest turn on “Will & Grace” (2002). Additionally, he contended at SAG and the Critics Choice awards for the Netflix comedy.

For his Emmy submission, Douglas has chosen the pilot, “An Actor Avoids.” In this installment, Sandy asks Lisa (Nancy Travis), a divorcee attending his acting class, out on a date. He meets with his agent, Norman (Alan Arkin), who informs him that CBS has passed on him for an upcoming sitcom. Norman tries to get his old pal to visit his dying wife, Eileen (Susan Sullivan), but Sandy’s nervous about confronting his own mortality. He later shows up at their house, where the ailing woman asks him to take care of her husband when she’s gone. While out with Lisa, Sandy’s daughter, Mindy (Sarah Baker), calls to tell him Eileen has taken a turn for the worse, and he races to the hospital to find her dead, with Norman at her bedside.

Can Douglas win for this episode? Let’s take a look at the pros and cons:

With two Oscars on his shelf (Best Picture for 1975’s “One Flew Over the Cuckoo’s Nest” and Best Actor for 1987’s “Wall Street”) and dozens of film credits, Douglas is the kind of bona fide movie star the TV academy loves to shower with accolades (as they did when he place Liberace in “Candelabra”). He even won the Golden Globe over reigning Emmy champ Bill Hader (“Barry”), against whom he’s competing here. Given how unstoppable Hader looks for a repeat victory, having a little Hollywood sheen certainly helps your chances at an upset.

When it comes to comedy acting victories, “Kominsky Method” creator Chuck Lorre has the magic touch. In this category alone, his shows have guided Jim Parsons (“The Big Bang Theory”) to four victories and Jon Cryer (“Two and a Half Men”) to one. Will Douglas be the latest actor to benefit from the Lorre bump?

In “An Actor Avoids,” Douglas gets to make us laugh and cry in equal measure, with jokes about the aches of aging coupled with the pain of loss. Sandy Kominsky might be a failed performer, but Douglas proves yet again why he’s been a success for more than 40 years.

Despite winning the Golden Globe in Best Comedy/Musical Series, “The Kominsky Method” failed to crack the Emmy’s Best Comedy Series lineup. It failed to get much of anything, in fact, aside from Douglas, Arkin in supporting and sound mixing, making this once mighty contender feel like a bit of an afterthought.

Did we mention Douglas is running against Hader, who’s all but assured a second consecutive victory for “Barry”? For Douglas, Anthony Anderson (“Black-ish”), Don Cheadle (“Black Monday”), Ted Danson (“The Good Place”) and Eugene Levy (“Schitt’s Creek”), the nomination itself almost feels like the reward.