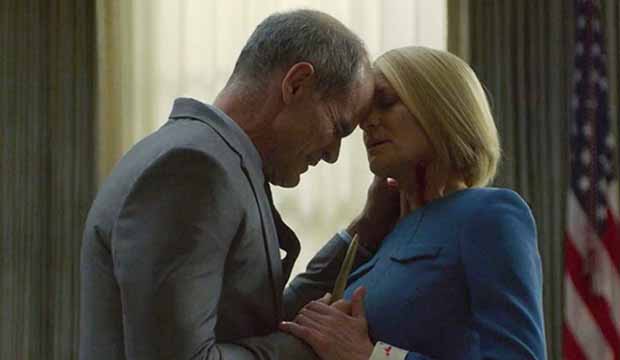 Michael Kelly is on his fourth Emmy nomination for playing Doug Stamper, the former chief of staff for President Frank Underwood on “House of Cards.” He contends for Best Drama Supporting Actor for the sixth and final season of the flagship original series from Netflix. But the show almost didn’t get a proper sendoff at all after the Kevin Spacey scandal threatened to halt production. With the lead actor fired, Frank was killed off the show, and in this final season Doug tried to take down the new president, Claire Underwood (Robin Wright). Kelly has submitted the series finale, “Chapter 73,” to Emmy voters for consideration.

The episode opens with Doug staring up at the camera asking what Frank would do. Later he addresses the press at the White House, angrily saying that Frank thought Claire was unfit to be president. Then Doug sits with a reporter, revealing the contents of Frank’s audio diary, and he tries to kiss her, but she recoils.

Doug has a threatening phone call with Claire, then conspires with Seth (Derek Cecil) to assassinate her, and in the final scene of the series Doug finally confronts her in the Oval Office. He confesses to killing Frank and breaks down in tears. He then holds a letter opener to her neck demanding that she give Frank the credit he deserves. But Claire takes the letter opener and stabs Doug. He dies on the floor in Claire’s arms.

Will Emmy voters give Kelly a farewell hug? Let’s examine the pros and cons.

The final scene provides Kelly with dramatic fireworks. He cries! He shouts! He dies! This will leave an impact on Emmy voters.

He’s in about 18 minutes of the episode, which for a supporting contender is a considerable amount. He has plenty of material and his storyline looms large.

Kelly has been consistently nominated for this role over the years, showing that the academy has a longstanding appreciation for this performance.

“House of Cards” was Netflix’s first original drama to make waves at the Emmys. If voters are feeling sentimental about closing the book on this series, they may think this is a good place to reward it.

Kelly is up against three actors from “Game of Thrones” (Alfie Allen, Nikolaj Coster-Waldau and Peter Dinklage) and two from “Better Call Saul” (Jonathan Banks and Giancarlo Esposito). If fans of those shows can’t decide between those contenders, they could split the vote, opening the door for Kelly to prevail.

“House of Cards” has never won an Emmy for lead or supporting acting. The only performance award the show has ever won was Best Drama Guest Actor for Reg E. Cathey in 2015.

While Kelly gives a layered performance, Doug is a cold character that some voters may find it hard to empathize with.

The behind-the-scenes troubles that almost derailed the show entirely might tarnish it in voters’ eyes. The reviews for the final season were also somewhat mixed.