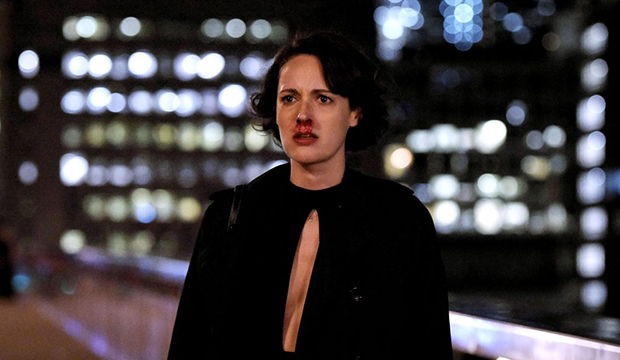 If there’s one person who had a bloody good Emmy nominations morning, it’s Phoebe Waller-Bridge, who scored nominations for writing, producing and starring in “Fleabag.” She’s also up as a producer on Best Drama Series contender “Killing Eve,” which earned her a writing bid last year. Adapted from Waller-Bridge’s own one-woman show, “Fleabag” stars the multi-hyphenate as the titular character, a young Londoner struggling with grief and man problems. The show’s first season brought her a BAFTA victory in Best TV Comedy Actress, which she hopes to repeat at the television academy.

Waller-Bridge has submitted “Episode 2.1,” which brought her the writing bid, for her Best Comedy Actress nomination. In this installment, Fleabag celebrates the engagement of her godmother (Olivia Colman) and father (Bill Paterson) by dining with them, her sister (Sian Clifford), her drunken brother-in-law (Brett Gelman) and a hot priest (Andrew Scott). As old family wounds get reopened, she ends up with a bloody nose and a crush on the holy man.

Can Waller-Bridge win for this episode? Let’s take a look at the pros and cons:

Between her Emmy success with “Fleabag” and “Killing Eve,” an upcoming National Theater Live presentation of “Fleabag’s” theatrical version and a writing gig on the next James Bond film, Waller-Bridge is the new “it” girl. It’ll take a certain kind of magic to upset six-time champion Julia Louis-Dreyfus (“Veep”), who returned to the race for her show’s farewell season after taking a year off, and this British insurgent might be the only one capable of doing it.

In taking a year off, Louis-Dreyfus allowed Rachel Brosnahan (“The Marvelous Mrs. Maisel”) to take the crown, and both are duking it out against newcomer Waller-Bridge, prior nominee Natasha Lyonne (“Russian Doll”) and previous winners Christina Applegate (“Dead to Me”) and Catherine O’Hara (“Schitt’s Creek”). While Brosnahan and Louis-Dreyfus are both competing in the returning victor lane, a third contender could come up the middle and spoil the race.

If there’s one thing Emmy voters love, it’s actors creating and starring in their own shows. Like Bill Hader (“Barry”), Donald Glover (“Atlanta”) and Tina Fey (“30 Rock”) before her, Waller-Bridge could be the latest thespian to write their way to an acting win. It certainly helps that the performance — which both pokes fun at and burrows deep into the character’s damaged psyche — is really good.

“Fleabag” exploded at the Emmys this year, snagging 11 bids after a first season tally of zero. Considering the second season is its last, voters only have one chance to shower it with as many prizes as possible, and what better way to honor it than heap multiple awards on its creator and star?

If there are any certainties in life, it’s to never bet against Louis-Dreyfus for “Veep.” Voters are expected to give her one last chance to accept a trophy for the HBO political laffer, especially after taking a year off to receive cancer treatments. Even with Waller-Bridge’s hot status, this might be one Goliath too massive to topple.

Though she could go the way of Hader, Glover and Fey, Waller-Bridge could just as easily get her reward in the writing category, a la Aziz Ansari (“Master of None”) or Louis C.K. (“Louie”), both of whom won for their scripts but lost for their performances.

Are the 11 nominations for “Fleabag” a show of strength, or merely a fluke? We won’t know until the envelopes are opened, but either is possible.