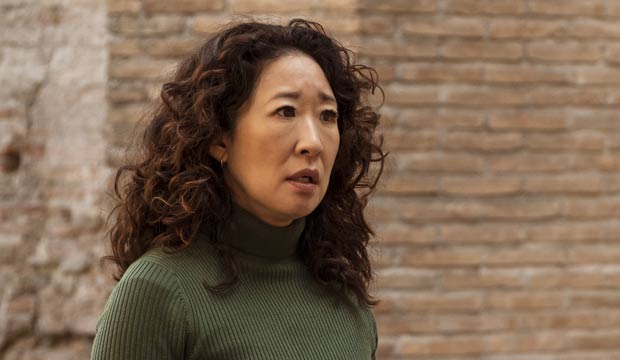 Sandra Oh is killing it on the awards scene, having scared up four Emmy nominations this year: Best Variety Special (Live) for hosting the Golden Globes, Best Comedy Guest Actress for hosting “Saturday Night Live,” and Best Drama Series and Best Drama Actress for producing and starring in “Killing Eve.” While she has both her comedic and dramatic chops on display as Eve Polatstri in the BBC America drama, the season two closer “You’re Mine,” which Oh has submitted to Emmy voters, is anything but funny for her character.

In this episode, Eve panics when undercover Villanelle (Jodie Comer) mistakenly lets her safe word (“gentleman”) slip during breakfast with the psychotic Aaron Peel (Henry Lloyd-Hughes) after finding out that her former handler Raymond (Adrian Scarborough) is one of his prospective buyers. But Villanelle’s only intention is to lure Eve, who arrives at Peele’s mansion dressed as a maid to find the two calmly feasting. Peele offers Villanelle a job if she kills Eve, but instead she slits his throat and leaves Eve shocked, as they had been ordered by Carolyn (Fiona Shaw) not to kill him. But it turns out that Carolyn orchestrated this whole twisted mess, which she reveals to Eve back in her hotel room.

Villanelle makes her way to Eve’s room, but is blocked by an axe-wielding Raymond, who attacks her. When she seemingly has one foot in the grave, Eve comes to her rescue and queasily delivers the fatal blow. Taking a life sends her on a guilt trip, but she soon discovers it was avoidable: after escaping to a Roman ruin, Villanelle pulls out a pistol that she’d been carrying with her, so Eve realizes Villanelle could have defended herself all along. Villanelle just wanted Eve to become a killer too. Having now completely sussed Villanelle out, Eve snaps and walks off, but is shot in the back by Villanelle before she can get anywhere.

Will the “Grey’s Anatomy” vet finally get her due after waiting patiently for 14 years? Let’s take a closer look at the pros and cons:

After five noms for Best Drama Supporting Actress for her work on “Grey’s Anatomy” (2004-2009) and one for Best Drama Actress last year for “Killing Eve’s” freshman season, the stars might be aligned for Oh to finally pick up her first Emmy. Because if her four nominations this year tell us anything, it’s that there’s a readiness to reward her. Drama Actress seems like the most logical place to do so since she was already shortlisted there last year and it would be a way to recognize her crowning achievement. Besides, after becoming the first actress of Asian descent to be nominated in this category last year, she could now make history as the first to win it.

Following her Golden Globe, Critics’ Choice and Screen Actors Guild Award wins this year, she just needs the Emmy to complete her sweep. Although those victories were for “Killing Eve’s” first season and the Emmys are now considering her for the second,  her performance in “You’re Mine” could sway voters, as it’s an excellent showcase of her ability to seamlessly juggle multiple emotions at once.

Although Oh’s character is in the show’s title, “Killing Eve” is still very much a two-hander, especially in the second season, where Comer arguably stole the show. This year Comer received a Television Critics Association nom for Individual Achievement in Drama while Oh wasn’t even nominated, and Comer won the Best Actress BAFTA over Oh. With Comer now nominated at the Emmys alongside Oh, it’s possible both actresses will have substantial support, splitting their votes and opening the door for another nominee to win.

Voters aren’t always sentimental; overdue status isn’t an unconditional ticket to an Emmy win. For instance, Steve Carell (10 noms), Don Cheadle (9 noms), Hugh Laurie (10 noms) and Angela Lansbury (18 noms) are among the many actors still seeking their maiden statuette despite frequent nominations. And even if voters are in a sentimental mood this year, they might just check Emilia Clarke (“Game of Thrones”) or Robin Wright (“House of Cards”) as they’re also Emmy-less and competing for the final seasons of their shows.