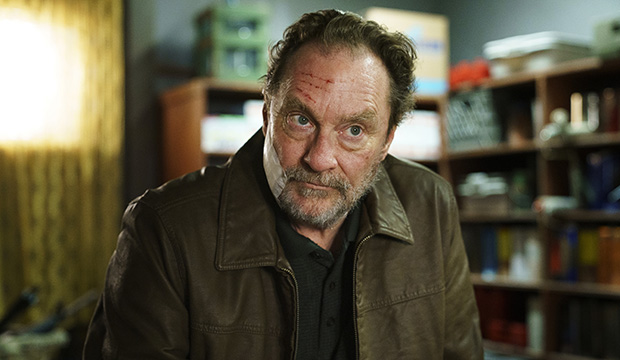 After three decades, Stephen Root finally received his first Emmy nomination this year, for playing Monroe Fuches, an opportunistic operator who helped make Barry (Bill Hader) a hit man, on the HBO dark comedy “Barry.” Will he make up for lost time and win on his very first try?

The actor has submitted the Season 2 finale, “berkman > block,”  to Emmy voters. The episode opens with Fuches holding a gun to Gene’s (Henry Winkler) head. When police cars are heard, he whispers something in Gene’s ear and runs away.

Later in the episode, Fuches approaches Hank (Anthony Carrigan) to offer his services. He explains that he’s had a falling-out with Barry and needs help. A gang arrives and Fuches approaches them to affably negotiate. It turns into a long speech that gets intense as he explains how people can fit together or drift apart. But his speech does the trick in bringing peace to warring gangs.

Towards the end of the episode, an angry Barry arrives to kill Fuches, who desperately escapes. The final shot of the episode shows that Fuches had whispered into Gene’s ear that Barry killed his girlfriend.

Can “berkman > block” score Root an Emmy? Let’s look at the pros and cons.

Root gets a big speech, which often proves to be a winning ingredient at the Emmys. It takes up a majority of his seven-minute performance, and he is charming and intense during the monologue, displaying good range.

With two co-stars, Carrigan and Winkler, in his category, voters will get to check out Root’s performance in their submissions, “Past = Present x Future Over Yesterday” and “What?!” In these episodes, Fuches has a heart-to-heart with Barry and wears a wire for the FBI.

The second season of “Barry” scored an impressive 17 Emmy nominations, up from last year’s 13. Clearly, there’s a lot of love for the show in the academy.

Hader’s and Winkler’s wins last year prove that the acting branch is very much into the series. Their passion for the show has been affirmed with five acting nominations this year.

Fuches is an unlikable character who is out for himself and an antagonist for Barry. It might make him a difficult character for voters to empathize with.

Root’s biggest hurdle could be vote-splitting with Carrigan and reigning champ Winkler. None of them is an outright frontrunner over the other two, and since winners are determined by a plurality vote, voters might have a hard time picking their favorite “Barry” supporting guy.