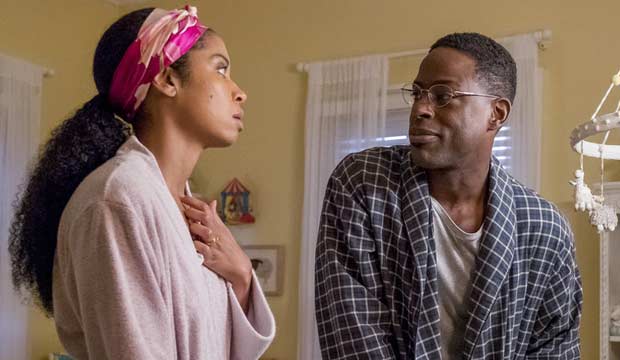 Sterling K. Brown is no stranger to the Emmys. He won the first two he was nominated for: Best Movie/Mini Supporting Actor for “The People v. O.J. Simpson” in 2016 and Best Drama Actor for “This Is Us” in 2017. He has now nabbed his fifth Emmy nomination this year, his third in a row for playing Randall Pearson on “This Is Us.” For Emmy consideration, he has chosen to submit “R&B,” the penultimate episode of season three.

“R&B” was a difficult episode for fans of “This Is Us,” who had to witness the near destruction of Randall and Beth’s (Susan Kelechi Watson) marriage. Like many episodes, “R&B” features scenes in the past and present, with viewers getting to see major moments in Randall and Beth’s relationship, from their first encounter, to Randall’s (multiple) proposals, to their wedding day. The episode is bookended by scenes in the present, when Beth tells Randall she feels like there’s not enough space for her to pursue her dreams, while Randall argues back that he has made sacrifices of his own. Randall walks away after Beth takes a cheap shot at him for his anxiety attacks.

Can Brown win his third Emmy this year? Let’s take a look at the pros and cons.

Brown gets to show off the wide range of his talent in “R&B,” from dramatic monologues to moments of comedy. He and Watson get juicy material in those heavy present-day scenes, and both rise to the occasion without making their marital argument cliche. Brown also gets to have a lot of fun with Randall’s goofy side in the past, exemplified by his various failed marriage proposals. There is also Randall and Beth’s tender wedding moment during which they speak from the heart as they say their vows. The episode runs the emotional gamut of a marriage, with all its highs and lows.

Even if Brown didn’t have such a dynamic episode, though, his popularity as an actor certainly helps his chances greatly. Emmy voters clearly love the guy, giving him five nominations in just four years. Last year Brown lost to Matthew Rhys for the final season of “The Americans,” so with Rhys gone, Brown is essentially the defending champion among this year’s nominees. It’s possible some voters could just check off the name of their previous fave.

SEESterling K. Brown (‘This Is Us’) on Randall living in ‘shades of grey’ [Complete Interview Transcript]

While “This Is Us” is still going strong with nine Emmy nominations this year, will voters still feel an urgency to reward Brown given that he has won so recently? Best Drama Actor contains multiple options that are more immediate, like buzz-worthy Billy Porter for the first season of “Pose,” heroic Kit Harington for the last season of “Game of Thrones” and perennial nominee Bob Odenkirk for “Better Call Saul,” who is becoming overdue for a win. Then there’s Jason Bateman in “Ozark,” who also is due his first Emmy and just won the Screen Actors Guild Award earlier this year.

Additionally, Brown is once again nominated with his TV dad, Milo Ventimiglia. While Brown was able to overcome vote-splitting in 2017, he might not be able to do so this year considering Ventimiglia had a strong Vietnam story arc in season three. “This Is Us” fans in the academy might truly be split on who to go with this year, leading to neither of them winning.

Who was best dressed at Monday's Oscars 2020 nominees luncheon in Hollywood?

Not so fast, Laura Dern! 1 of our Top 24 Users predicts Scarlett Johansson will win Supporting Actress…

Is Scarlett Johansson doomed to be this year's Julianne Moore at the Oscars?

Alicia Keys was outstanding as 2020 Grammys host: Most fans say, 'Bring her back next year!' [POLL…

Oscars: Can Pixar keep up its good fortunes in Best Animated Short with 'Kitbull'?

Demi Lovato ('Anyone') gave the best performance at the 2020 Grammys, according to music fans [POLL…