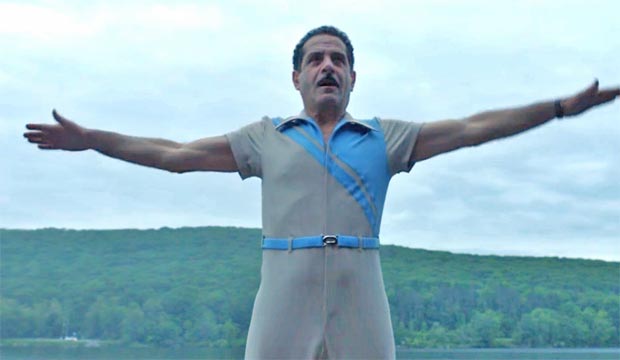 Tony Shalhoub has earned his second consecutive Emmy nomination for Best Comedy Supporting Actor for his role as Abe Weissman in “The Marvelous Mrs. Maisel.” This marks Shalhoub’s 10th career nomination. He earned eight consecutive nominations in the Best Comedy Lead Actor category for “Monk,” winning the award in 2003, 2005 and 2006. Shalhoub has entered the episode “We’re Going to the Catskills!” to Emmy voters.

In the episode, Abe takes his family on their yearly summer trip to the Catskills. Abe is worried about Midge (Best Comedy Actress nominee Rachel Brosnahan) and Rose (Best Comedy Supporting Actress nominee Marin Hinkle) packing too many outfits as he has precisely calculated the exact space he has in the family’s U-Haul. Once they arrive, Abe is horrified by the presence of a new gofer at the resort. As a man who hates change, Abe soon reduces the man to a puddle.

Midge’s estranged husband Joel (Michael Zegen) arrives late and has no place to stay, so he sleeps on Abe’s sofa. Later, Michael observes Abe leave the house in a blue romper to engage in his daily pre-dawn calisthenics. A running theme throughout the episode involves Abe’s devotion to his drinking schedule, which he believes will help him avoid becoming intoxicated.

Can Shalhoub add to his Emmy haul with a win this year? Let’s examine the pros and cons of his submission.

Shalhoub has several comic highlights throughout the episode, from his mathematical planning of packing a trailer, to his repeated and delightful attempts to drink without getting drunk. And at the center of it all is the hilarious calisthenics scene, which was such a comic highlight that it spawned numerous thinkpieces dedicated to Abe’s romper.

Season 2 of “Maisel” raked in an impressive 20 nominations, up from last year’s 14. That level of support, along with Shalhoub’s recent victory at the SAG Awards — which lumps supporting and lead performances into the same category — indicates a strong level of industry support that could carry Shalhoub to victory.

While Shalhoub has the longest submission in the category, there are long stretches of  the episode where he is not onscreen. It is possible that voters may prefer to reward a nominee with who is more consistently present in his submission.

With three previous Emmy wins, voters may feel that Shalhoub has already been well-rewarded. This leaves an opening for previously unrewarded veterans Stephen Root (“Barry”) or Alan Arkin (“The Kominsky Method”) to take home their first Emmy.