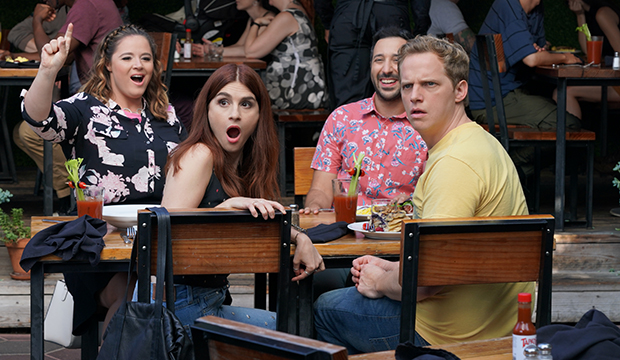 After five years of rudeness, deception, selfishness, substances of all types and the glory of “Sunday Funday,” “You’re the Worst” has finally come to an end. The FXX comedy series airs its finale tonight, and this closing season has officially cemented the show as one of the most honest, brutal and weirdly endearing programs about modern relationships. It hasn’t been able to get into the Emmy race so far, but final season nominations would show everybody why it’s always been one of the best.

The show focused on the relationship between Jimmy Shive-Overly (Chris Geere), an egotistical and insolent British writer living in Los Angeles, and Gretchen Cutler (Aya Cash), a derisive and brash public relations specialist. Since their coupling started Jimmy and Gretchen have navigated their disdain for relationships, Gretchen’s clinical depression, Jimmy’s unresolved family issues and even Jimmy abandoning Gretchen after she accepted his marriage proposal in a blunt manner that’s also been funny, moving and even sweet.

The centerpiece of the show’s final season was, and has been since the show premiered in 2013, the actors. Geere and Cash have played these characters brilliantly and would be worthy of every accolade imaginable. Cash in particular has always been a stand-out for the show, especially during Gretchen’s bouts of clinical depression that she captured perfectly and it continues as we see her succeed in her elements at work only to ultimately sabotage herself in the end. Geere has walked a very thin line in playing Jimmy as someone who can be savagely brutal but also extremely pathetic in how he insults people but, somehow, is still charming.

The show’s two main supporting players have also continued their scene-stealing skills and are equally deserving of recognition. Desmin Borges’s portrayal of Edgar, Jimmy’s PTSD suffering roommate, continues to be the emotional heart of the show and he delivers a knockout in the final two episodes as he pleads for Jimmy not to marry Gretchen. Kether Donohue also never stops shining as Gretchen’s best friend, Lindsay. She provides what might be the best moment of the season when she helps Gretchen role play calling her mother to tell her of her upcoming nuptials. Lindsay yelling to Gretchen, “You’ve been nothing but a dead weight since they cut you out of my uterus!” made me have to pause the episode because I was laughing so hard.

The actors would be nothing without the story arc that was crafted by the show’s writers, led by series creator, Stephen Falk. He used several tricks that kept the audience guessing and excited for what the finale would ultimately reveal. The first half of the season opener was about two characters we had never met before it’s revealed that the story is an elaborate lie Gretchen is telling a prospective wedding planner about how her and Jimmy met. This set up a brilliant device to keep us guessing whenever the show displayed what looked like a flash-forward to what appeared to be Jimmy and Gretchen’s relationship disintegrating. Eventually, the story resolves itself in a way that is positive for everyone on the show but at the same time it never felt like it was a cop out or against the grain of what makes the show so different.

Could “You’re the Worst” actually break through at this year’s Emmys? The show’s consistent critical praise definitely helps as the show’s Metacritic score demonstrates, having been in the mid-80s since season two. Being on FXX is also a plus as the channel’s sister network, FX, is the only basic cable network that’s gotten into the Comedy Series race, first with “Louie” (2013-2015) and then “Atlanta” (2017-2018). The show has been able to garner attention at the Critics’ Choice TV Awards. It was nominated for Best Comedy Series in 2015 and again the following year along with nominations for Comedy Actress (Cash) and Comedy Supporting Actress (Donohue). Hopefully Emmy voters will pay attention and see that the “Worst” has actually been one of the best things on TV.