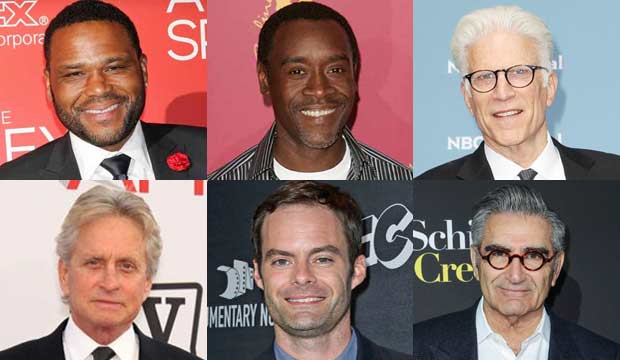 Hader had previously won an Emmy for producing “South Park” (2009), but last year’s “Barry” victory was his first for acting. The former “Saturday Night Live” regular is actually nominated for a whopping five Emmys this year: acting, writing, directing and producing “Barry” and producing the variety series “Documentary Now.”

Two forecasters — Robert Rorke (New York Post) and Matt Roush (TV Guide Magazine) — aren’t swayed by all of the support for Hader, as they predict Douglas will prevail for his role as acting coach Sandy Kominsky on Netflix’s “The Kominsky Method.” This is Douglas’ sixth career Emmy nomination, though he’s only taken home one trophy, for “Behind the Candelabra” (2013). Of course, he’s also a two-time Oscar winner for “One Flew Over the Cuckoo’s Nest” (1975) and “Wall Street” (1987).

Matt Webb Mitovich (TVLine) stands alone in thinking Danson will hear his name called on September 22 for NBC’s cerebral comedy. This TV legend is already in the Emmy record books for receiving his lucky 13th nomination in the Best Comedy Actor category this year: 11 for playing lovable bartender Sam Malone on “Cheers” (1983-93) and two as demonic Michael on “The Good Place” (2018-19). He won twice for “Cheers,” in 1990 and 1993.

Finally, one Expert — Mary Murphy (Gold Derby) — goes out on a limb for Levy to win on his first nomination for the cult Pop hit. Levy already has a pair of Emmys on his mantel for writing “SCTV” in 1982 and 1983, but this would be his first as an actor. He portrays Johnny Rose on “Schitt’s Creek,” the father of the wealthy Rose family who moves to the small town after losing their fortune.

Below, see how all six Best Comedy Actor nominees place in our Experts’ rankings. Do YOU agree or disagree with our Emmy gurus’ predictions? Give us your take down in the comments section.