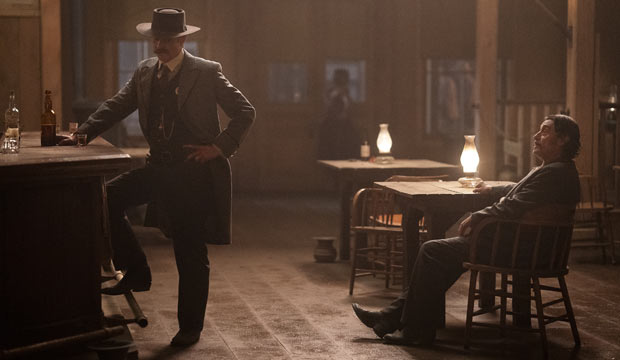 “Black Mirror” has owned the Best TV Movie Emmy race the past two years — it’s the first program with multiple wins in the category — but its reign will end this year, according to our odds.

“Black Mirror: Bandernsatch” is in second place in our predictions, with 37/10 odds, trailing “Deadwood: The Movie,” which carries 16/5 odds. The long-awaited conclusion to the groundbreaking HBO Western, which was abruptly canceled in 2006 and was only nominated for Best Drama Series once, in 2005, is by far the biggest competition “Black Mirror” has faced in this category over three years. And in the name of playing catch-up, this would be the perfect chance for voters to give “Deadwood” and creator David Milch a long overdue win (bonus: stars Ian McShane and Timothy Olyphant are executive producers on the film, so they’d snag some gold too).

“Bandersnatch” is still the “cooler” show, but unlike the past two years, when “USS Callister” and “San Junipero” both won Best Limited Series/TV Move Writing, “Bandersnatch” failed to get a nomination there — part of a dubious historic snub for TV movies in acting, writing and directing this year.

There’s also a new stricter rule dictating that TV movies be at least 75 minutes long to qualify in the category, which means the 60-minute “San Junipero” would have been ineligible, but the 75-minute “USS Callister” would have made it. (“Bandersnatch,” a choose-your-own-adventure episode with five endings, has an average runtime of 90 minutes.) The change suggests that the TV academy wants to prevent programs from taking advantage of the category with standalone episodes like “Black Mirror” and “Sherlock” have done to great success.

Anything other than these two as a winner would indeed be a shocker, as “Brexit,” “My Dinner with Herve” and “King Lear” are all tied with 9/2 odds, and Best TV Movie is the sole nomination for all of them.