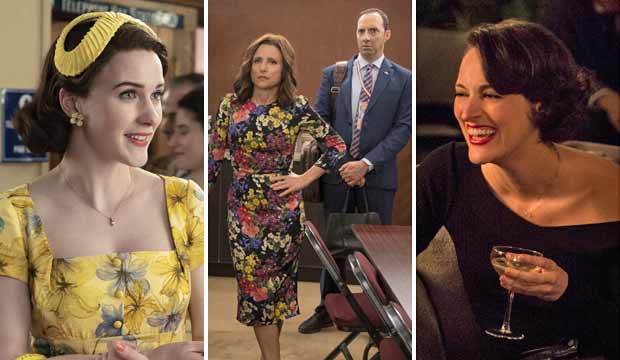 The Emmys are right around the corner, bbut predicting Best Comedy Series hasn’t gotten any easier. There’s still a three-way tie between “Fleabag,” “The Marvelous Mrs. Maisel” and “Veep,” all of which get leading odds of 11/2. But the Expert journalists we’ve surveyed from top media outlets are ever so slightly leaning in one direction over the others. A plurality of them say “Veep” will be victorious for the fourth time.

That’s a pretty even split between those three shows, so it seems like this race really could go in any of those directions this Sunday night. But perhaps the Creative Arts Emmys from this past weekend can guide us as we all pull our hair out over our predictions until the very last minute.

“Maisel” won six Creative Arts Awards, including guest-acting prizes for both Jane Lynch and Luke Kirby, which suggests ample support from the television academy across the board. Last year “Maisel” won eight Emmys total, which set a new record for the most awarded comedy series in a single year. It could match or exceed that total this year whether it wins Best Comedy Series or not.

“Fleabag” also showed significant strength at Creative Arts. It’s not as technically lavish a production as the 1950s-set “Maisel,” but it still eked out wins for Best Picture Editing and Best Casting. That latter win might be especially consequential since Best Comedy Series and Best Comedy Casting have matched for the last four years.

“Veep” was shut out at Creative Arts, which is perhaps worrying for the HBO political satire since the show always at least won the aforementioned casting award in the years it won Best Comedy (2015-2017). But “Veep’s” strength at the Emmys has never been in craft categories, so its shortfall may not signal doom.

None of our Experts are betting on “Barry” or “Russian Doll,” but we shouldn’t underestimate them either. Each has more nominations than “Fleabag” and “Veep” — “Barry” has 17 and “Doll” has 13 — and both won multiple prizes at the Creative Arts Awards, so they just might be sleeping giants at this weekend’s main event.