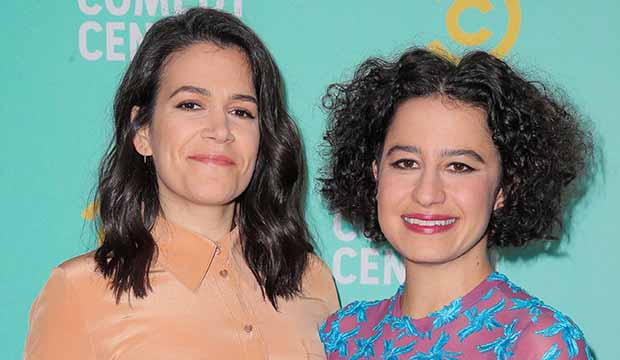 Knowing that “Broad City” would be coming to a close this year brought a lot of anticipation as to what the finale would hold for the program’s beloved characters. What we, as an audience, ended up getting was a magnificent display that embraced everything that the show had been about over its five year run. It’s a wrap-up that should join the greatest in television history including “M*A*S*H,” “Newhart” and “Six Feet Under.”

The episode, simply entitled, “Broad City,” was written by the show’s creators and stars, Abbi Jacobson and Ilana Glazer. It’s Abbi’s last day in NYC before she leaves to begin her artist’s residency in Boulder, Colorado. She and Ilana venture to get a breakfast sandwich from their favorite bodega, only to find it has closed. On their way back, Ilana discovers a luxury toilet that’s been abandoned on the sidewalk. As they haul the toilet across the Brooklyn Bridge, the Ilana’s emotions become too much for her and she leaves Abbi on the bridge. Abbi gets back to her apartment to find Ilana has arranged a surprise rooftop party for her. After the party Abbi takes some videos of Ilana doing social justice riffs on random topics. The two friends then share a heartfelt goodbye before Abbi departs for the airport. Several months later, they are staying in touch through Facetime and the camera pulls out showing several other pairs of best friends having the same adventures in New York City.

There are so many aspects of this ending that Jacobson and Glazer just nail. One big one is that it never forgets to include the material that has made “Broad City” one of the funniest shows of the past decade. The toilet adventure coupled with Ilana’s constant worrying about what she and Abbi will do when the apocalypse comes is classic for her. Her repeated mentions of meeting Abbi in St. Louis and giving her a go-bag for when Armageddon happens is the kind of humor you would expect from any episode.

But the way the duo mix in the emotional parts of what the finale means for their characters is done on a perfect ratio with the show’s traditional aspects. The beautiful friendship that’s been shown over the show’s five seasons makes the emotional moments on the Brooklyn Bridge and the farewell outside Abbi’s apartment just as emotional for the audience as it is for the characters. It gets capped off with a reminder that while the nature of their friendship has changed with the distance between them, they are still there for each other and that nothing can change the fundamental bond that they have built.

The last shot showed why this show has resonated with so many people. We see groups of best friends that span the entire spectrum of people who reside in New York, all races, genders, religions, sexual orientations and gender identities. It’s simply perfection. If the way this finale was structured doesn’t merit a nomination at this year’s Emmys, I honestly don’t know what does.