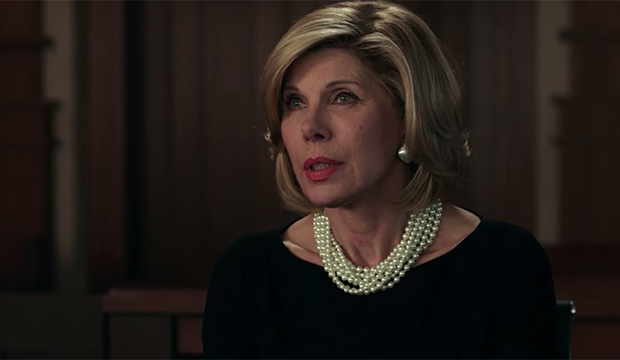 I am among the watchers of all seven seasons of “The Good Wife” who believe that its CBS All Access web spin-off, ‘The Good Fight,’ has grown even better than the original.  As much as I enjoyed Julianna Margulies as Alicia Florrick, who worked her way up from junior litigator to being a partner at a law firm over the years,  her love life’s ups and downs with her cheating politician husband and her college-crush co-worker were often exhausting.

The character’s travails and triumphs often overshadowed that of Christine Baranski’s Diane Lockhart, a highly regarded legal mind who would become a mentor to her, one who stood up for liberal principles and women’s rights.  One of the best storylines that happened to Diane was when she fell for Kurt McVeigh, a firearms expert and conservative Republican played with manly silver-fox elan by Gary Cole.

Let’s applaud the Michelle and Robert King, the creators of both series, for placing Diane front and center in “The Good Fight” and continuing to focus on her opposites-attract marriage, which becomes even more important as this off-shoot show regularly acts a parallel political universe to the real-world age of Trump.  Yes, they have unlocked Diane’s heart and after growing numb to world events following the 2016 presidential election, she has returned to fighting form in the show’s third season.

It’s unusual to choose a first episode of a new season as its best. But the Kings have managed to elegantly blend Baranski’s rich comedic gifts with political relevance as it affects her character’s personal life . As her current law firm struggles with #MeToo revelations of their late revered founder’s just-revealed legacy of sexually abuse, she has her own Trump-adjacent situation on her home front to contend with when she finds blond hairs on her husband’s jacket after he comes back from a shooting range. She suspects he might be cheating with a woman since the jacket smells like mousse or cologne.

Instead, Diane learns he has been hired by Eric Trump and Don Jr. to go on a safari overseas. Her reaction to the news? She hits her head on a door multiple times. When Kurt returns from the trip, he tries to hide the fact that one of the Trump boys hit him in the shoulder with buckshot a la Dick Cheney.

We then witness Diane and her hubby in bed as his nasty bruise turns into a face before her eyes and whines to her. She then bemoans, “Where did the real men go” like Burt Lancaster and Paul Newman, replaced by “snide creatures with slicked back hair and cologne.” The Kings provide a glorious payoff to this situation on the season finale  and this time it is Cole’s chance to shine along with his TV wife.

Yes, Baranski was up for an Emmy for her supporting performance on “The Good Wife” six times but never won. And the only nominations that “The Good Fight” has received have been for its fabulous original theme music and for a song  titled “High Crimes and Misdemeanors.”  Perhaps being a streaming show might have been a disadvantage. But now that the show will start airing its first season episodes on network TV for free, let’s hope that more Emmy voters wake up and realize that Baranski is doing some of her best acting ever in her illustrious career.