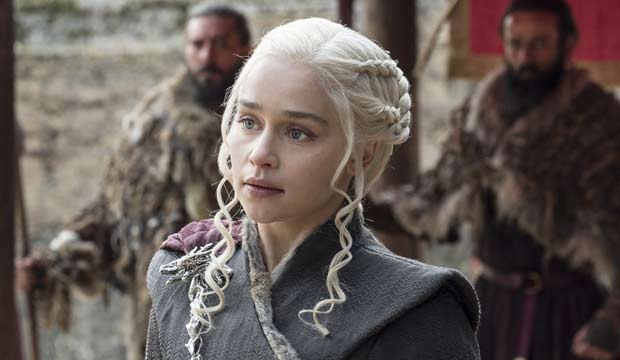 WARNING: The following story contains spoilers about the fourth episode of “Game of Thrones” Season 8, “The Last of the Starks.”

Emilia Clarke has netted three Emmy Award nominations for playing Daenerys Targaryen in HBO’s behemoth “Game of Thrones” – all in the drama supporting actress category (2013, 2015-16). This year, she could nab her fourth bid, but this time in Best Drama Actress. Both she and her co-star Kit Harington attempted to break into the lead races for the first time last year, after contending in supporting for the first six seasons. They may have both been snubbed, but they’re giving it a second go-around this year.

SEEYou’re invited to our Q&A: Meet music composers of ‘Game of Thrones,’ ‘Free Solo,’ ‘The Other Two,’ ‘When They See Us’

Under Emmy’s old voting system, Clarke would arguably be competitive for the win with her performance in “The Last of the Starks.” With the Night King and his Army of the Dead now a problem of the past, the focus shifts back to the defeat of Cersei (Lena Headey) and her army, and the conquering of King’s Landing. Daenerys begs Jon (Harington), rightful heir to the Iron Throne, to keep his Targaryen descent a secret to secure her ascension to the throne. Jon spilling the tea, however, isn’t Daenerys’ only problem in this episode, as she’s ambushed by the Iron Fleet on her way to Dragonstone, resulting in her dragon Rhaegal’s death and the capturing of her advisor Missandei (Nathalie Emmanuel). Her ensuing failed attempt to make a truce with Cersei leads to Missandei’s death, leaving a vengeance-driven Daenerys bristling with rage.

The stoic nature of Clarke’s character completely disappears in this episode, allowing her to display her incredible dramatic range. While the circumstances surrounding her character could be better, we finally get to see sides of Daenerys that we haven’t seen so far. Every bit of anger, disappointment, heartbreak, and anxiety is not only felt and seen but most importantly, earned. By the end of the episode, when we see Daenerys walking away from the gates of King’s Landing with a flash of fury crossing her face, we feel and understand her pain, which is a great feather in Clarke’s cap.

SEEWhy Daenerys should be mad in ‘Game of Thrones’: Video recap of ‘The Last of the Starks’ [WATCH]

Hence, it’s no surprise that critic David Sims (The Atlantic) praises her for doing “some of her better work when conveying Dany’s desperation that Jon not share the secret of his birthright.” And Caitlin PenzeyMoog (The AV Club) commends her “nice bit of facial contortion when Cersei kills Missandei.”

Although the season’s final two episodes are still sight unseen, Clarke is in a good position since her character is currently the center of the storyline. With this season of “Thrones” being its final one, voters might just check it off in every category as a goodbye hug, which would benefit Clarke. Her snub last year may not be a cause for worry as the eligible seventh season had aired an entire year before voting. Plus, with the field being relatively wide open – Sandra Oh (“Killing Eve”) is the only possible returnee from last year’s lineup – and “Thrones” perhaps being too big to ignore, Clarke could just ride the wave of support for the show to a nomination. The fact that the show will still be fresh in voters’ minds when they receive their ballot only helps.

SEEStarbucks responds to ‘Game of Thrones’ coffee cup gaffe in most fanboy way ever: Dragons drink ‘whatever they want’

In terms of winning, Clarke may have more of a hurdle since Peter Dinklage is the only “Thrones” actor to have ever won an Emmy, three times in fact (2011, 2015 and 2018). That being said, all bets are off when a show has the final season push working in its favor, so perhaps Clarke is the one to change the course for “Thrones” actors.