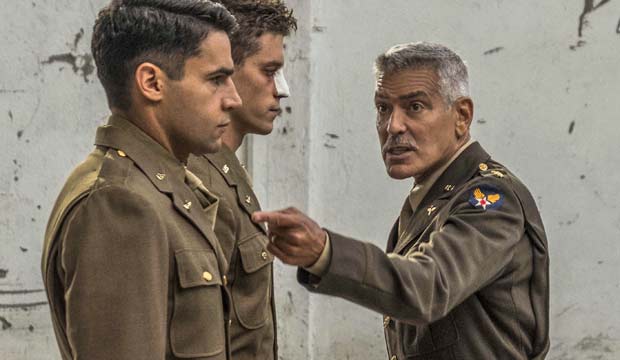 “Catch-22” is Hulu’s epic new adaptation of the classic Joseph Heller novel about Captain John Yossarian, a young US Army bombardier (Christopher Abbott) stationed in Italy during World War II, who is desperate to fulfil his seemingly interminable flight mission quota, so he can be discharged and finally return home.

The show opens on Yossarian wandering a busy military tarmac wearing nothing but a pair of boots. He looks defeated and unhinged as he eventually screams hysterically while his army buddies look on in the distance. We are then transported back to the beginning to explain how he went from cocky wide-eyed innocence to broken, jaded and traumatized, suffering setback after setback until he snaps. This is a devastating but often very funny satire about sanity, mortality and the futility of war, as young and eager bombardiers are sent up into the sky in cramped warplanes to drop bombs on the enemy, over and over again until they reach breaking point. At the show’s core is the inescapable catch-22 scenario of its title; if a soldier is insane, he is discharged from flying more missions, but if he applies to be grounded, then he must be sane enough to want to avoid it, so his request is denied and he is sent back up into the air. This theme is mined to heartbreakingly comical effect throughout the show’s six episodes.

Against the harrowing backdrop of war, there are often genuinely funny moments peppered throughout the series, just like the acclaimed source material. The script is brimming with crisp and witty dialogue by writers Luke Davies (“Lion”) and David Michod (“Animal Kingdom”), the cast is excellent, including heavyweights like Oscar winner George Clooney (who co-produced the adaptation with long-time collaborator Grant Heslov), Emmy winner Kyle Chandler (“Friday Night Lights”) and 10-time Emmy nominee Hugh Laurie (“House”). It is also a visual and aural feast, with stunningly beautiful cinematography by Martin Ruhe and an evocative musical score by award winning sibling composers Harry Gregson-Williams and Rupert Gregson-Williams, collaborating for the first time.

Critics have heaped praise on the series, which has scored a 70 at MetaCritic and is 85% certified fresh at Rotten Tomatoes. Malcolm Venable (TV Guide) calls it “exceedingly well done” and Richard Roeper (Chicago Sun-Times) says that the show might “remind you of ‘M*A*S*H,’ but Heller’s novel actually came first. It’s not easy to balance a whip-smart farce about military bureaucracy with deadly serious wartime issues, but “Catch-22” does just that.”

As for the Emmys, “Catch-22” could be a dark horse contender in the competitive limited series categories, despite them overflowing with worthy contenders, like “When They See Us,” “Chernobyl,” “The Act,” “True Detective,” “Sharp Objects,” “Escape From Dannemora,” “Fosse/Verdon,” “A Very English Scandal,” “Les Miserables,” “Dirty John” and “The Spanish Princess.” Emmy voters are fans of this genre though, so they might gravitate to “Catch-22” like they did with nominee “Generation Kill” in 2009 and winner “Band of Brothers” in 2002.