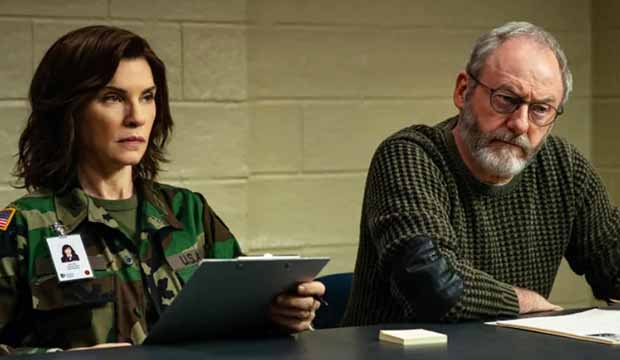 “The monster has returned,” lieutenant colonel Nancy Jaax ominously writes to her former mentor Wade Carter in the premiere episode of National Geographic’s limited series “The Hot Zone.” When Jaax (Julianna Margulies) believes that Ebola Zaire has surfaced in an ill monkey in Reston, Virginia, she reaches out to the ostracized Carter (Liam Cunningham) for advice, though she suspects he may not answer her clarion call. Both Jaax and Carter lie at the heart of “The Hot Zone,” and Margulies and Cunningham both deliver strong performances that anchor the miniseries with their emotional intensity.

Though much of “The Hot Zone” takes place in and around Washington, D.C. in 1989 and centers on Jaax’s mission to contain a potential outbreak of the Ebola virus, a significant portion of the program depicts Carter’s journey to Zaire in 1976 when he first encounters Ebola. In order for these storylines to work, Margulies and Cunningham both need to command the screen, balancing the often complicated medical dialogue with the raw emotional stakes of their discoveries and actions.

WATCH our interview with Julianna Margulies about “The Hot Zone.”

Out of the six “Hot Zone” episodes on NatGeo, Margulies particularly shines in the fourth installment, “Expendable,” in which Jaax confronts personal and professional obstacles. Realizing that Ebola may have spread to the entire primate shelter in Reston, Jaax interviews and selects a team of young recruits for a mission to euthanize all of the sick and aggressive monkeys. After deciding on her team, Jaax receives a call that her father (Chuck Shamata) is in the hospital and may not live much longer. Margulies is especially moving when she speaks to her father on the phone, as she quietly and tearfully grapples with her conflicting desires to be at his side and live up to her professional obligations.

Spurred on by the gravity of the situation, Jaax briefs her team on their upcoming mission, but the colonel (Robert Wisdom) informs her that he has chosen her husband Jerry (Noah Emmerich) to lead the mission in her place. Nancy confronts Jerry about his role in the colonel’s decision, rightfully aggrieved that she gets benched despite having more experience and training with pathogens. Margulies powerfully conveys Jaax’s frustration and sense of obligation to the young men and women she who will risk their lives and need her leadership. Moments later, Jaax also faces off with Carter, who will accompany Jerry on the mission, in a rare moment of conflict between the two characters. No longer needed in Reston, Jaax gets to visit her ailing father and Margulies beautifully implores him to keep fighting until she’s able to visit again. In these four key scenes, Margulies displays her tremendous range and fully explores the depths and nuances of her inspiring character.

Cunningham also has ample opportunity to demonstrate his range, especially in episodes where he plays Carter in 1976 and 1989. After a brief, enigmatic appearance in the first episode, Carter dominates in the second, “Cell H,” and Cunningham delivers perhaps his best performance of the six-episode run. In Zaire, Carter and a younger CDC agent Trevor Rhodes (James D’Arcy) try to get to the bottom of a mysterious illness that has affected various villages. The brash, domineering Carter boldly navigates tribal customs to accomplish what he assumes will be an easy expedition, but gets shell-shocked by the episode’s end when he and Rhodes find an entire village torched to the ground by its inhabitants in an effort to stave off the spread of the illness. Cunningham brilliantly conveys the emotional toll that the images and the stench of burning flesh has on the previously steely Carter.

This particularly motif comes full circle in the final episode of the miniseries, “Hidden,” when a tribal leader infected by Ebola asks Carter to help him end his life so that enemy tribes will not see him in waning health. Carter weighs the decision and ultimately obliges, burning down his dwelling. Although Carter does so defiantly, Cunningham registers his character’s ambivalence and perhaps even remorse when he blankly stares at the conflagration. In these and other quiet moments of the series, both Cunningham and Margulies fully display the emotional depths that blaze in “The Hot Zone.”