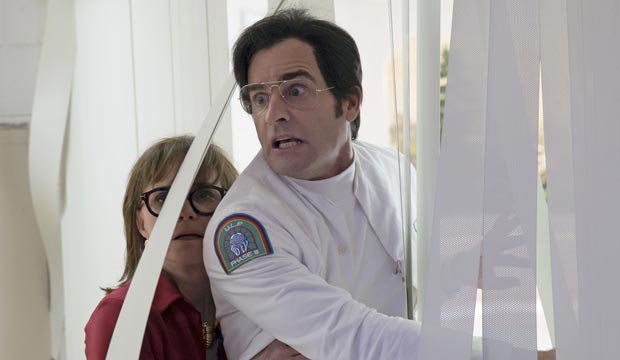 Justin Theroux doesn’t shy away from playing characters on the brink, from his role as a besieged director in David Lynch‘s surreal “Mulholland Drive” to poor, tormented Kevin Garvey in “The Leftovers.” He deserved an Emmy for the latter but never got one, and he’s worthy of at least a nomination for his supporting role in yet another mind-bending project, “Maniac,” which is all the more impressive for how much of a left turn it is from his last series role.

“Maniac” is a 10-episode Netflix limited series starring Jonah Hill and Emma Stone as strangers who become entangled in each other’s minds when they enter a mysterious pharmaceutical trial. Theroux plays Dr. James K. Mantleray, the scientist running the trial who struggles with confounding computer glitches and mommy issues that are oddly interconnected.

The series is directed by Cary Joji Fukunaga, whose work is usually on the darker end of the spectrum (“True Detective,” “Beasts of No Nation,” “The Alienist“). That makes the mix of absurdity and melancholy in this sci-fi head trip something of a departure for him, but Theroux navigates those tonal shifts with ease — or at least it looks easy when he does it.

As a character, Dr. Mantleray is definitely skewed towards the absurd; at one point we barge in on him being pleasured by a virtual reality sex program. And Theroux plays him as awkward and mannered on the job, hiding his anxiety under a bad toupee and a veil of professionalism until he’s forced to consult his mother (Sally Field) and all that goes out the window — well, he gets to keep the toupee. It’s a performance that finds just the right amount of weird and just the right amount of pathos for this gonzo story.

SEEWill Netflix’s ‘Unbreakable Kimmy Schmidt’ win something — anything — at Emmys for final season?

Brian Tallerico (RogerEbert.com) says Theroux is “wonderfully fearless in his oddity.” Alan Sepinwall (Rolling Stone) thinks he and his co-stars are “marvelous.” And Ben Travers (IndieWire) notes that the actor has “the most outrageous scenes,” but he “reads between the lines of each scene and mines the most authenticity out of a pretty preposterous character.” He’s funny, but also sad as he finds himself stuck between lifelong resentment for his mother and a desperate need to impress her.

It couldn’t be more different from his “Leftovers” performance, and I’m still smarting from the fact that he was never even nominated for that. The HBO series never got the time of day from Emmy voters, except one guest-acting nomination for Ann Dowd when the show ended in 2017. Theroux excelled in one of the most difficult dramatic TV roles in recent memory as a man coping with the Rapture (and maybe also being a prophet). He would merit an Emmy nomination for “Maniac” just to make up for that. But it also happens to be another performance that merits the honor.