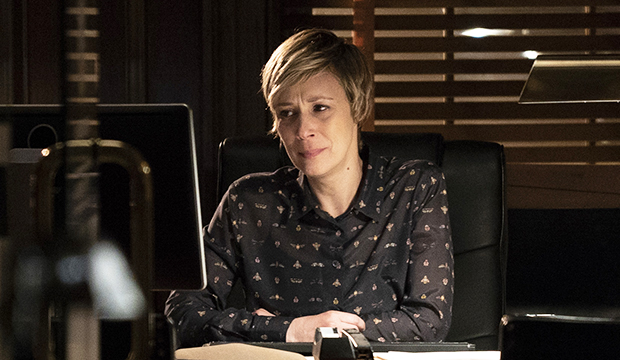 Through four seasons, ABC’s “How to Get Away With Murder” has produced six Emmy nominations — all for acting, for Viola Davis (Best Drama Actress, 2015-2017) and Cicely Tyson (Best Drama Guest Actress, 2015, 2017-18). But it’s high time for another “Murder” vet, Liza Weil, to break through at the Emmys, after giving yet another powerful performance this season. Can Weil finally get away with a bid, just like her character has, well, gotten away with murder?

Since the show’s inception, we’ve witnessed Bonnie (Weil) go through tough times, and this season unsurprisingly put her through the wringer yet again. The season starts out well for her: back-and-forth text messages with her boyfriend Ronald Miller (John Hensley), dinner with Annalise (Davis), and yes, even a beaming smile on her face. That quickly changes when she is, once again, forced to face her traumatic past and comes face to face with her long-estranged sister.

Matters take a turn for the worse after Nate Sr.’s (Glynn Turman) death, complicating Bonnie’s relationship with Ronald, who’s also the ADA.  Everything comes to a head when Nate Jr. (Billy Brown) is presented with potential evidence that Ronald ordered his father’s death. A triggered Nate then irrationally confronts Ronald and beats him nearly unconscious, leaving a shell-shocked Bonnie to unwillingly finish him off.

Grief-stricken and wracked with guilt, Bonnie spends the second half of the season fearful of the more-than-likely possibility that Ronald may have actually been innocent, going as far as contemplating suicide. Even though her fear ultimately becomes reality, she is spared this unfortunate truth.

Throughout “Murder”‘s five seasons, Weil has filled Bonnie’s shoes expertly and created a fully realized, complex character. With mere facial expressions, gestures or line delivery, Weil reminds viewers where her character comes from: a dysfunctional household with a sexually abusive father. Even when she’s committing premeditated murder, Weil visibly conveys Bonnie’s complicated inner turmoil. And it only works because she’s able to give heft to Bonnie’s sometimes incomprehensible and grave mistakes without attempting to justify them.

In Season 5, her traumatic childhood and youth haunt her more than ever, and Weil brilliantly portrays how the past can define someone’s entire life. Her depiction of grief and the difficulty of letting oneself grieve, as well as carrying the inevitable burden of guilt, is unsettling and bold, yet poignant and reminiscent of real life at the same time.

So it’s fitting that, citing the fifth episode of Season 5, Kayla Kumari Upadhyaya (The AV Club) says, “Everything about Weil’s physicality in this episode so aptly conveys deep, dark depression. She really does deserve more attention for her acting on this show.“

While Davis won Best Drama Actress in 2015, “Murder” has generally been overlooked by the TV academy. With NBC’s “This Is Us” being an exception, broadcast network dramas have struggled in the age of Peak TV to hold their own against cable and streaming dramas. Breaking into the Best Drama Supporting Actress lineup will be an uphill battle for Weil, but with lots of turnover in that category — Lena Headey (“Game of Thrones”) is the only eligible returning nominee — and with Davis and Tyson potentially returning to their respective lineups, nothing should be beyond the realm of possibility.