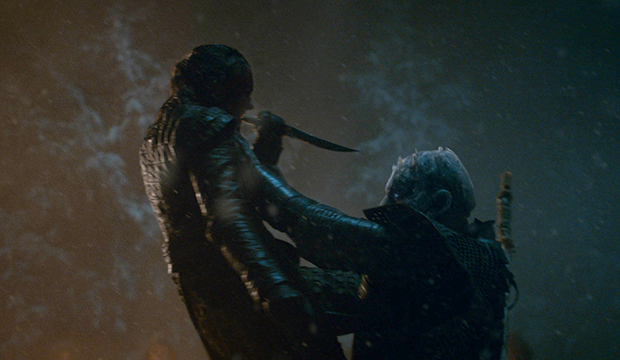 WARNING: The following story contains spoilers about the third episode of “Game of Thrones” Season 8, “The Long Night.”

HBO’s “Game of Thrones” finally delivered its much anticipated Battle of Winterfell in Sunday night’s episode, “The Long Night,” which was arguably one of the show’s most astounding outings. But let’s talk about the real star of the episode, Arya Stark (Maisie Williams), who finally dealt the death blow to Westeros’ big bad, the Night King and his fear-inducing, king-sized Army of the Dead. While we don’t know whether Arya will end up sitting on the Iron Throne, one thing is for sure: Williams has a good chance of ascending the Best Drama Supporting Actress Primetime Emmy Award throne this year.

“The Long Night” may be an 82-minute battle-focused spectacle, but that didn’t stop Williams from giving a show-stopping performance. Arya’s entire journey, all her rigorous training, pays off in this episode, particularly when she ambushes the Night King and plunges the Valyrian-blade dagger into him. With so little words spoken during the episode, most of her performance relied on her physicality and ability to convey emotions subtlely, which she pulled off effortlessly. Whether Arya was trying to get past the wights in the Winterfell library or exchanging an ominous glance with Melisandre (Carice van Houten), Williams was thoroughly impressive.

It’s not surprising that she has received widespread critical acclaim for her work in this episode:

Hillary Kelly (Vulture): “Someone hand Maisie Williams an Emmy right now for the training she must have endured to roll down the backs of the wights so effortlessly, to twirl that double-edged stick like a Texan cheerleader wields a baton, to so smartly play Arya as absolutely terrified when she leaps and rolls through the bookshelves.”

Alex McLevy (The AV Club): “Maisie Williams sold the hell out of this; each decision flickered across her face in a combination of paranoid panic and cautious wilting, from the impulsive tossing of the papers across the room to the agonizing moments sliding from bookshelf to bookshelf, unsure if the next one would put her face to face with the undead.”

With this season of “Game of Thrones” being its final one, the HBO behemoth is projected to make quite a dent in the nominations. Williams could ride the overall wave of support for the show to a nomination and perhaps even win, given that her character is now even more of a key figure in the show’s storyline. Plus, we already know that voters take to her performance, as she received her inaugural Emmy nomination in 2016 for her work in the show’s sixth season.

Hence, Williams’ snub last year may be no cause for worry, especially since the drama field is rather barren this time around. With her co-star Lena Headey being the only returnee from last year’s seven-actor lineup, the category is now wide open. In our odds, Headey is currently the category frontrunner, while Julia Garner (“Ozark”) is in second place, Williams in third, Rhea Seehorn (“Better Caul Saul”) in fourth, Williams’ other co-star Sophie Turner in fifth, and Susan Kelechi Watson (“This Is Us”) in sixth.

With her co-stars in contention, Williams does run the risk of splitting the vote with them, should they be nominated. That being said, Headey has only appeared in a single episode so far, and Turner’s character, Sansa, has not had as significant a storyline as Arya thus far. But with three episodes left, that could, of course, change.