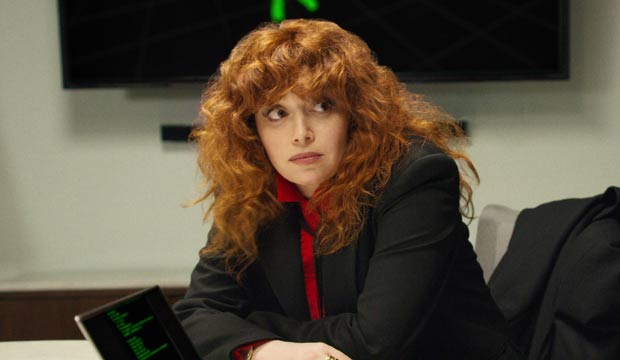 Natasha Lyonne has been a star since she was a teenager, from her roles in “Slums of Beverly Hills” (1998), “American Pie” (1999) and “But I’m a Cheerleader” (1999) to her recent turn as prison inmate Nicky Nichols in “Orange is the New Black.” But she outdoes herself in her new Netflix series “Russian Doll,” which starts with a high-concept premise and then spirals out into new, bizarre, absurd and often moving directions. And she’s not only the star of the show, she’s also a co-creator, writer, director and producer.

Lyonne created “Russian Doll” with Leslye Headland (“Bachelorette,” “Sleeping with Other People”) and Amy Poehler (“Parks and Recreation”), and she stars as Nadia Vulvokov, a video game designer celebrating her 36th birthday. But Nadia keeps dying in calamitous ways, and every time she does she returns to the same moment to start again, respawning just like a video game character. Why is she stuck in this time loop, and how can she get out of it?

That’s all I’ll say of the plot because what starts as a straightforward premise develops in unexpected ways that are best experienced without advance knowledge — imagine if David Lynch remade “Groundhog Day.” But what’s especially remarkable when all is said and done is how well Lynne steers the ship in all aspects of the production. Before this her only writing and directing credit was the 2017 short film “Cabiria, Charity, Chastity.” Yet she co-writes multiple episodes of this series, directs the finale, and navigates her character’s unusual arc with confidence.

At first her Nadia is abrasive, reckless and uninterested in emotional connections — a familiar character type. But as the series progresses it delves surprisingly deep into how and why she built up a wall between her and the rest of the world. There’s a loyal, self-reflective person at the heart of all those bad decisions, and this reliably funny series periodically takes us off guard with moments of poignancy and insight.

SEEAva DuVernay’s Central Park Five drama on Netflix gets a title, teaser and premiere date: ‘When They See Us’ debuts on … [WATCH]

The reviews for “Russian Doll” were glowing. It scored 89 on MetaCritic based on 24 reviews, all of them positive. Todd VanDerWerff (Vox) writes, “The series is probably too weird to win a bunch of Emmys, but God willing, Lyonne will be nominated. She’s so good.” Judy Berman (Time) adds, “Nadia’s specificity is paramount. Her arc feels like the ideal fusion of Lyonne’s gruff authenticity, Headland’s acerbic humor and the warm, humanistic perspective that defines Poehler’s work.” And Caroline Framke (Variety) says Nadia is “a complex role that’s worthy of [Lyonne’s] formidable snarl and talent.”

Lyonne is already an Emmy nominee, having earned a bid for Best Comedy Guest Actress for “OITNB” (2014), but she could blow that wide open with “Russian Doll,” potentially joining the likes of Donald Glover (“Atlanta”), Bill Hader (“Barry”), Lena Dunham (“Girls”) and more who have collected multiple nominations for their unique work on both sides of the camera. And hopefully VanDerWerff is wrong about this show being too weird for the Emmys. I think it’s just weird enough.