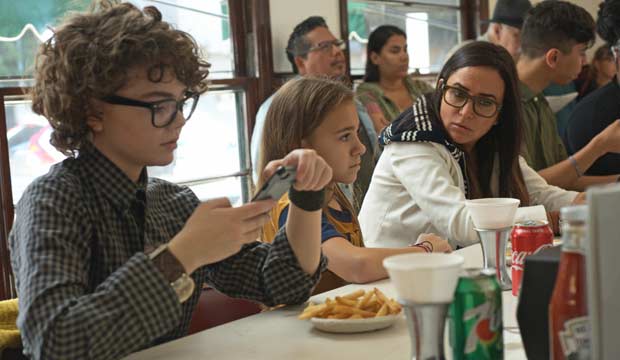 As the father of two boys, I must say that no television show on the air right now better encapsulates the joys and sorrows of parenthood than Pamela Adlon’s FX series “Better Things.” It may be the best comedy since “Roseanne” to show warts-and-all parenting: a turbulent, messy, battle royale that brings out the best and worst in both parent and child. And in the show’s acclaimed third season, those ups and downs were displayed in their most hilarious and painful glory.

The series revolves around Sam (Adlon), a working actress and single mom to three girls: Max (Mikey Madison), Frankie (Hannah Alligood) and Duke (Olivia Edward). As is the case in most families, each child is a unique entity brimming with quirks, strengths and flaws. And each in her own way tests Sam’s parental endurance.

This season began with Sam dropping eldest daughter Max off at college only for Max to return home a few episodes later having decided that college wasn’t right for her. Max regresses to lying around the house, smoking pot with her friends and having random guys in her bed — all right under her mother’s nose. Sound familiar to any of you parents out there?

Then there’s middle child Frankie, perhaps the most middle child I’ve seen portrayed on television. Frankie is a bit of a radical — reading and performing poetry, smashing the patriarchy and challenging societal norms. She’s a smart girl for sure. But she also can be horrible, often pelting her mother with sarcastic barbs that are sometimes funny but other times just plain cruel.

That cruelty is especially highlighted in the third season finale, in which Frankie has moved out of the house. Sam spends much of the episode desperately trying to reconnect with her and failing to understand why her daughter has pushed her away, and Adlon’s anguish is palpable. But the reason for Frankie’s anger is never explicitly revealed, which makes it especially relatable and cathartic for any parent who has raised a teenager.

Even the youngest, Duke, is not above using a little emotional manipulation on her mother, threatening to call the authorities if she doesn’t get a turn behind the wheel while Sam gives Frankie a driving lesson. Thankfully for Sam, Duke still has a couple more years to grow into as big of a pain in the ass as her sisters.

As devoted and patient — and you may even argue, submissive — as Sam can be, there are also moments when Sam loses her cool. An acting highlight for Adlon occurs in the season’s 11th episode, “Get Lit.” Sam finds Max and her friends stoned and making a mess in her kitchen. After they dismiss Sam’s light scolding, Sam lays into each kid before confiscating their weed pipe. That sound you hear is everyone who has ever parented a teenager cheering as Sam screams, “Clean this up! Move out! Don’t bring this shit to my house!”

But even in those heightened moments there is never a doubt that Sam loves her girls and vice versa. Even Frankie takes a break from her awfulness to write Sam a birthday card that ends with the words every parent wants to hear: “Sorry I’m such an asshole.” I’m still waiting on my card, by the way.

The strength of this family dynamic is a testament not only to Adlon’s work as actor, writer, director and producer, but also to Madison, Alligood, and Edward. Each character is clearly defined. Despite their often terrible attitudes — which continue to give me flashbacks of my sons’ teenage years — there are shades of vulnerability and insecurity that remind viewers that we’ve all been moody teenagers before.

Adlon has earned two consecutive Best Comedy Actress nominations at the Emmys, but those are sadly the show’s only bids. This season has an impressive score of 94 on Metacritic, which makes it one of the most acclaimed programs of any genre this season, so I think it’s time for Emmy voters, particularly those with kids, to give this show a lot more kudos. Raising children, as rewarding an experience as it is, can also fill even the most compassionate, level-headed parent with enough anxiety and frustration to rip the hair from their own scalp or reach for the nearest liquor bottle — or both? “Better Things” manages to make that funny. Isn’t that worth some more recognition?