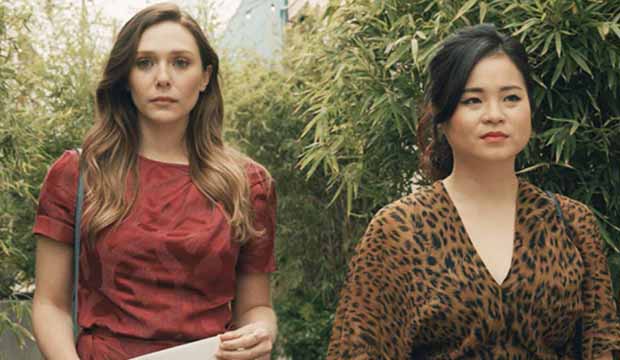 Hidden behind the memes, baby photos and targeted ads that populate Facebook lies a hidden gem of a show just waiting to be watched. “Sorry for Your Loss” tells the story of a young exercise instructor named Leigh Shaw (Elizabeth Olsen) who struggles through the grief of losing her husband unexpectedly. Told in 10 easily-digestible 30-minute episodes, the series takes great care to depict the mourning period in a manner that is both realistic and raw. Leigh isn’t always a sympathetic young widow you are constantly feeling sorry for. She makes mistakes. She says the wrong thing sometimes. She can be headstrong to a fault. But one look at the hundreds of Facebook comments that pour in underneath each episode demonstrates just how important and true to life the show is to those going through Leigh’s exact situation.

SEE Over 100 interviews with Emmy contenders

“Sorry for Your Loss” can be a tough watch for those who have recently lost a loved one. It isn’t easy to witness the unbearable grief Leigh is experiencing however it may manifest in each episode. She is constantly reminded of the life she had with her husband, Matt (Mamoudou Athie), whether it’s a dog she takes in that reminds her of the dog they previously owned, her bumping into the florist from her wedding or the constant presence of Matt’s brother, Danny (Jovan Adepo), who is going through his own process. A lesser show would put so much weight on these moments that it would be too depressing to bear regardless of how “raw” it was. The writers behind “Sorry for Your Loss,” on the other hand, know that life isn’t always so unpleasant, even for those who have gone through unspeakable loss. Every episode is punctuated with humor, through an oblivious stranger, an inappropriate joke or an awkward situation. There is a refreshing honesty in displaying all of life’s ups and downs.

Olsen turns in an astonishing performance here, proving she is one of this generation’s most exciting young talents. There is an openness to her performance that draws you in with every choice she makes, every facial tic, every switch in Leigh’s mood. There is something so recognizable about Leigh, not from other TV series and films but from the world itself. Olsen and the writers don’t slot her into an easy stereotype. It calls to mind Jennifer Lawrence‘s role in “Silver Linings Playbook,” playing a widow wise beyond her years. The nature of “Sorry for Your Loss” being a series allows the “Avengers” star to dive deeper into her character, but even from the pilot episode, you wholeheartedly believe her as Leigh in a way that makes her as compulsively watchable as Lawrence in 2012. After this performance, she deserves the kind of flourishing career Lawrence has had this decade.

Helping Olsen is a strong ensemble of supporting players. Kelly Marie Tran, of “Star Wars” fame, is excellent as the effervescent Jules, Leigh’s alcoholic sister who keeps an upbeat attitude despite what life has thrown at her. Oscar nominee Janet McTeer is always a delight as Amy, Leigh and Jules’ mother, who is ready to dole out any New Age knowledge she can. There’s also Adepo as Danny, who is no stranger to exploring themes of grief and loss as a veteran of “The Leftovers.” Athie is also a standout as we get to know Matt through flashbacks, learning of his passions and long-running battle with depression. Everyone has their winning moments and their low points, further illustrating that no one truly has it all figured out. Everyone is just working through their difficulties in life as best they can.

The glut of streaming TV has made it nearly impossible to keep up with everything, and “Sorry for Your Loss” has mostly failed to register with most TV connoisseurs, even the most dedicated among us. Some may not even know that Facebook has original programming, let alone a show like this, which is worthy of being included among the best TV has to offer today. All 10 episodes of Season 1 are available to watch for free for anyone with a Facebook account, no subscription needed. A series as moving and well-written as “Sorry for Your Loss” has no business being ignored, especially seeing how much it has helped viewers. There is even a “Sorry for Your Loss” support group on Facebook where those who have lost someone important to them can gather, tell their stories and bond over their love of the show. It is a show that might just help someone close to you who has gone through an unspeakable tragedy recently. It might just help you.