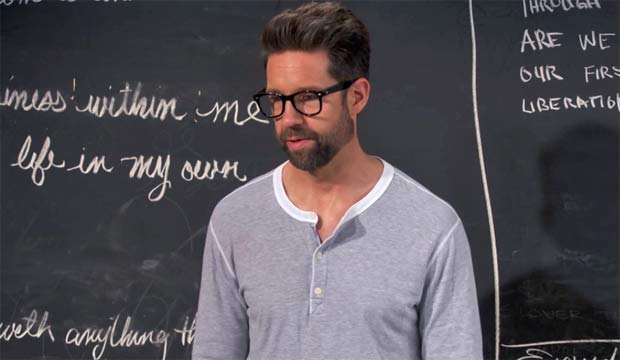 Todd Grinnell had big shoes — or in this case, a big tool belt — to fill, taking on the role of Schneider on Netflix’s reimagining of Norman Lear’s long-running sitcom “One Day at a Time.” This role was made iconic by the late Pat Harrington Jr., who won the show’s only acting Emmy during its original nine-year run (Best Comedy Supporting Actor in 1984). A strong presence in the update’s first two seasons, Grinnell really came into his own during the current third season, proving himself to be a worthy successor to his Emmy-winning predecessor. As Ryan Schwartz (TVLine) writes, “In Season 2, Justina Machado was the undisputed MVP. In Season 3, that honor goes to Grinnell.”

Grinnell’s Schneider is an entirely different character from Harrington’s blue-collar, wisecracking handyman. The new Schneider is a Canadian expat, hipster, trust-fund baby with a fondness for snow globes and goat yoga. Often clueless and imposing himself upon Penelope Alvarez (Machado) and her Cuban-American family, Schneider wants nothing more than to be accepted by the Alvarez clan, and will do whatever he can to feel like part of the family, boundaries be damned.

But there’s more to Grinnell’s Schneider than goofy comic relief. He’s a man with baggage, mostly from his contentious relationship with his overbearing, right-wing, elitist father (played by guest star Alan Ruck). He’s also recovering alcohol and drug addict whose battle with sobriety becomes one of the focal points in the latter half of the third season.

This sobriety storyline, as well as Grinnell’s performance, reaches its climax in the season’s penultimate episode, “Drinking and Driving.” After Penelope becomes suspicious that Schneider has fallen off the wagon she and Lydia (Rita Moreno) search his apartment, and despite Schneider’s denials they uncover a hidden stash of alcohol. Then, after Schneider hits rock bottom, he faces up to his relapse and returns to Alcoholics Anonymous where we finally hear Schneider’s first name: Pat (in a lovely homage to Harrington).

SEERenew ‘One Day at a Time’: Lin-Manuel Miranda, Gloria Estefan and more urge Netflix to bring back acclaimed sitcom

The episode gives Grinnell one impactful moment after another. When Penelope’s son Alex (Marcel Ruiz) discovers a drunken Schneider on the laundry room floor, Schneider begs him to keep his secret, going as far as to angrily shove the teenage boy. This is Schneider at his lowest, and Grinnell — himself a recovering addict — plays the scene to perfection, not once veering into caricature.

Grinnell shines again when he faces tough love from Penelope. Schneider laments that he has lost the trust of her family, removing his eight-year sobriety chip from the Alvarez Family Museum. As Schneider confesses his fear of returning to AA in shame after so many years without drinking, Grinnell almost appears to fold inward, crushed simultaneously by both his failure to stay sober and losing the trust of the family he loves.

SEEThe queen’s justice: Will Emmy voters finally bow down to Lena Headey for the final season of ‘Game of Thrones’?

This is exactly the sort of emotional range and impact you find in competitive Emmy submissions. As Sarene Leeds (Vulture) writes, “Grinnell takes his irrepressibly goofy trust-fund baby character to a dark place that previously had been only hinted at.”

“One Day at a Time” has been slow to catch on at the Emmys, earning only a pair of nominations for Best Comedy Multi-Picture Editing (2017-2018). But the show has been gradually accumulating nominations from other organizations, including Best Comedy Series bids at the most recent Television Critics Association and Critics’ Choice Awards. If the show continues to gain awards show traction, Grinnell’s performance could make him the second Emmy-winning Schneider.