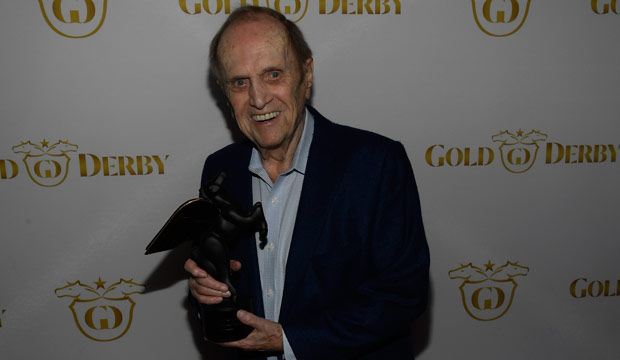 At 89, comic actor Bob Newhart doesn’t need the validation of shiny showbiz trinkets to prove he is a legend far beyond his own button-down mind. With a career that spans nearly six decades, he has won enough honors — ranging from the Mark Twain Prize for American Humor in 2002 to Gold Derby’s own Career Achievement Award that he received earlier this month (see above).

Newhart first found fame with what would be the first-ever comedy album to top “Billboard’s” sales charts, “The Button-Down Mind of Bob Newhart.” The recording would go on to win three Grammys in 1961. He soon became a TV star starting with 1961’s  short-lived variety series “The Bob Newhart Show,” which would win a Primetime Emmy Award for outstanding humor program.

His ’70s sitcom, also titled “The Bob Newhart Show,” revolved around his dry-humored psychiatrist and his array of unusual patients. His follow-up ’80s series, “Newhart,” found the comic being a TV talk show host who also is a Vermont innkeeper with an array of  eclectic characters. While both shows were popular and received Emmy nominations, Newhart got no Emmy love for his shrink but did receive three lead comedy actor nominations but no wins for “Newhart.”

It took a show about awkward nerds, CBS’ “The Big Bang Theory,” for Newhart to finally be rewarded with an individual Emmy, thanks to his 2013 guest role as Dr. Arthur Jeffries aka Professor Proton,  The host of a children’s science show that Jim Parson‘s Sheldon and Johnny Galecki‘s Leonard loved as kids. now makes appearances at children’s parties. The pair hire him and he is a little unnerved to entertain adult physicists.

When Professor Proton falls ill, he recruits Sheldon to fill in for him at a Korean child’s birthday party. Newhart’s character would show up on 5 more episodes, despite the fact he has gone onto that great science lab in the sky. That doesn’t stop Sheldon from consulting his hero in his dreams, including during an episode on the show’s 12th and final season.

Gold Derby’s combined user odds find Newhart in third place among guest actors in a comedy show, right below Peter MacNicol from “Veep” and John Mulaney from “Saturday Night Live.” The actor also appeared on two episodes of “The Big Bang Theory” spin-off “Young Sheldon” in 2017. It would be great just to hear monologist Newhart launch into what surely would be a memorable acceptance speech.