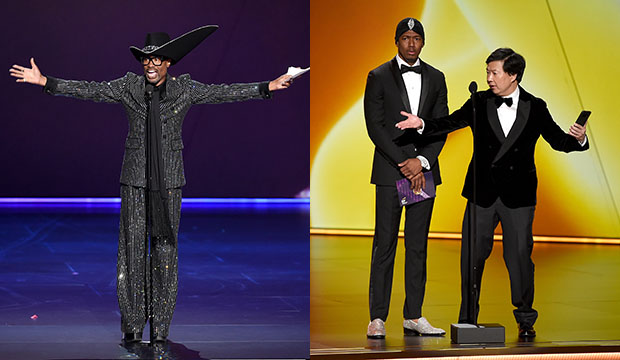 For the awards-obsessed writers and editors of Gold Derby, Emmy Sunday is one of the most anticipated events of the year. We eagerly await the opening of every envelope, listen intently to every speech and celebrate our savvy predictions while screaming over upsets we should have called. Below are our collective thoughts on the highs, lows and WTF moments from Sunday night’s Emmys. And check out the complete list of winners here.

Amazing victories for Jharrel Jerome, Billy Porter, “Fleabag,” and an epic acceptance speech by Michelle Williams. I wish Williams were eligible for another Emmy next year for that speech, because it was a stunner in which she urged Hollywood to pay women — especially women of color — the money and respect they’re worth. – Daniel Montgomery

Age bias no more: Jharrel Jerome and Julia Garner winning puts an end to the belief that only people of a certain age can win categories. Plus, they’re two very well-deserved wins. Jerome’s win remains my favorite of the entire evening. The sheer joy in his face is something I will not forget for a long time, and the audience reaction was absolutely priceless. – Luca Giliberti

Hilarious presenters! Thank you, Emmy producers, for pairing up some of the funniest people together, including Phoebe Waller-Bridge & Bill Hader and Jimmy Kimmel & Stephen Colbert. – Marcus James Dixon

Patricia Arquette‘s win for “The Act” was a surprising, well-deserved upset. After sweeping the other awards for her role in “Escape at Dannemora,” this was an exciting twist that caps off an incredible year for her. Helluva speech too. – Denton Davidson

“Fleabag” rightfully sweeps the comedy categories. So amazing to see Phoebe Waller-Bridge’s journey with this character, how it built word of mouth and managed to take down huge Emmy favorites like “The Marvelous Mrs. Maisel” and “Veep.” – Kevin Jacobsen

The speeches made the evening. Michelle, Billy [Porter], Alex [Borstein], Jharrel and Patricia all gave the ceremony the emotional punch that it desperately needed. – Tony Ruiz

I loved the spreading of the wealth on the drama side. “Game of Thrones” got two, including series, but we got to see “Ozark” win two as well and also wins for “Killing Eve,” “Pose” and “Succession.” It was a very welcome surprise since “Thrones” was expected to sweep. – Charles Bright

“Chernobyl” was a great winner for Best Limited Series, but I wish the Emmys had spread the wealth a little more to “When They See Us,” which only won twice, and “Sharp Objects,” which didn’t win anything. – Daniel Montgomery

The ceremony was a structural mess. Sometimes they showed clips for the nominees, sometimes only their names appeared on screen and sometimes the comedy actors only had their names read out. They should have been consistent with this because it really took you out of the moment. – Luca Giliberti

Stop having presenters do categories in which their show is nominated. – Joyce Eng

If you’re going to play clips of the nominees, which they didn’t for every category, then play clips that are long enough so that we get a sense of the performance. And for God’s sake, choose a format for presenting the nominees and stick with it. – Tony Ruiz

The farewell tributes to “Game of Thrones” and “Veep” were spectacular! This should be an annual thing for departing series. However, why didn’t all of the “GoT” stars who were in the audience get to go up on stage like the “Veep” cast did? – Marcus James Dixon

Ava DuVernay had two shots to win something for her amazing work on “When They See Us” and lost them both. I wanted to see her on that stage! – Denton Davidson

“Last Week Tonight” and “SNL” are fine shows but how about a little variety in the variety categories? Just shift them to the Creative Arts ceremony at this point. – Kevin Jacobsen

This is the second time that we didn’t get a humorous clip package of the writers nominated for Best Variety Series Writing, with the first being 2017. Those packages have always been a fun thing to look forward to and I really hope we get them back the next time those categories are presented on the broadcast in 2021. – Charles Bright

It was a pretty solid telecast throughout, which is why the variety song and dance number featuring Adam Devine stuck out like a sore thumb. That awkward segment hit a sour note and didn’t flatter Devine or Samantha Bee, who made a cameo appearance in it. – Daniel Montgomery

No non-Peter Dinklage “Thrones” actor ever won an Emmy for the show. Watching Lena Headey lose after giving win-worthy performances time and again was the biggest disappointment of the entire evening. Dinklage is a great actor, but some of his co-stars deserved to ascend that podium as well! – Luca Giliberti

It’s so easy to attack that painful production number, so let’s direct some fire at Ken Jeong’s tedious TikTok bit. It went on far too long, and even Nick Cannon looked confused. Although I was more confused by what was on Cannon’s head. – Tony Ruiz

“When They See Us” being overlooked for everything but Jharrel Jerome and casting is such a bummer. Ava DuVernay deserved so much better. – Kevin Jacobsen

“Barry” only got one win, which was a repeat for Bill Hader. Don’t get me wrong, I love “Fleabag” and “Mrs. Maisel” but this second season was so much more than just Hader’s amazing performance. The writing and directing in particular (especially in an episode like “ronny/lily”) were on another level, and it’s a crime that the show has never been recognized in either of those categories for the first two seasons. – Charles Bright

Why do the Kardashians continue to subject themselves to mocked appearances at these industry events? The laughter and jeers from the crowd after Kim Kardashian West touted that “truly compelling television comes from real people just being themselves,” with her supermodel sister Kendall Jenner standing by her side, was just awkward! – Denton Davidson

They should have been playing the shows’ themes throughout the entire ceremony. Those pop songs took away the charm and joy the theme songs usually bring. Please bring them back next year! – Luca Giliberti