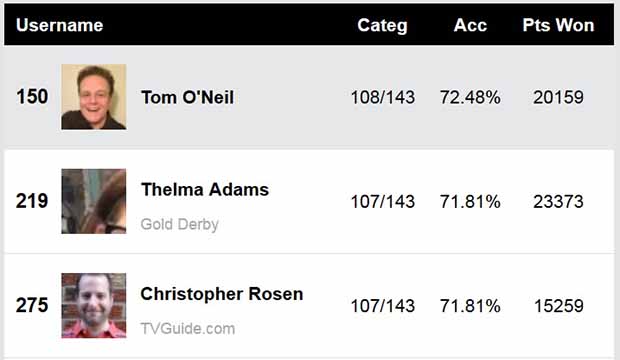 Congratulations to our Gold Derby founder Tom O’Neil for a tremendous score of 72.48% when predicting the 2019 Emmy Awards nominations on Tuesday. He is tops among 28 Experts, journalists who cover television or the entertainment industry throughout the year. See Experts’ scores.

Almost 4,000 people worldwide predicted these Emmy nominees announced by D’Arcy Carden and Ken Jeong in North Hollywood. O’Neil got 108 out of 143 nominee slots correct, including some tough ones like “Succession” for Best Drama Series, Kit Harington (“Game of Thrones”) for Best Drama Actor, Jharrel Jerome (“When They See Us”) for Best Movie/Limited Series Actor and Christina Applegate (“Dead to Me”) for Best Comedy Actress.