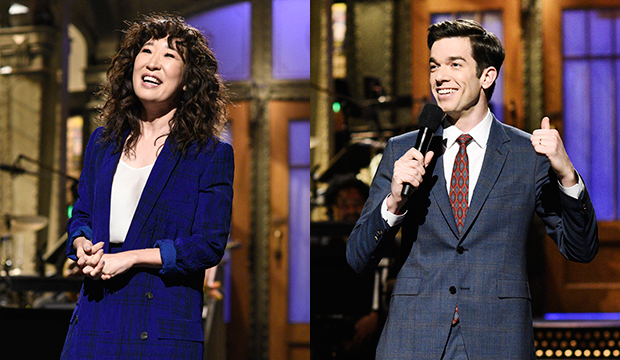 McKinnon has now earned six consecutive Emmy nominations for her work on “SNL,” winning gold in 2016 and 2017. After two seasons of her fellow repertory players being embraced as well, she is now back to being the only representative from “SNL” in the supporting acting categories. However, Leslie Jones did receive an Original Music and Lyrics nomination as one of the co-writers of “The Upper East Side,” a song featured on the James McAvoy episode of “SNL.” Emmy voters made up for the lack of regular cast member nominations by showering “SNL” hosts in the guest categories. Damon, Oh, Sandler and Thompson were all first-time hosts this season on “SNL,” while Mulaney hosted for the second time. De Niro is nominated for his recurring role as Robert Mueller, who led the special counsel investigation into Donald Trump.

Past “SNL” players also did very well with Emmys this year. Bill Hader, who earned two Emmy nominations for his work as a regular cast member, earned four nominations for producing, directing, writing and starring in “Barry.” Other notable “SNL” alums who earned Emmy bids this year for other projects include: Julia Louis-Dreyfus for her performance in “Veep,” Maya Rudolph for guest acting in “The Good Place,” Amy Poehler for co-hosting the reality series “Making It” and co-writing the pilot of “Russian Doll,” Jimmy Fallon for playing Beto O’Rourke in “Beto Breaks the Internet,” Seth Meyers for writing his late-night series and “Documentary Now!, Sarah Silverman for producing “I Love You, America,” Ben Stiller for producing and directing “Escape at Dannemora,” Michael McKean for his guest role on “Better Call Saul,” Andy Samberg for hosting the Golden Globes and Will Ferrell for producing “Succession,” “Live in Front of a Studio Audience” and “Drunk History.”

Mulaney, who also has “Documentary Now” in contention, Bob Odenkirk (“Better Call Saul”), Conan O’Brien (“Conan Without Borders”) and Adam McKay (“Succession”) are among the writing staff alumni nominated at the 2019 Emmys in other categories.

“Saturday Night Live” is expected to continue its dominance with a win in Best Variety Sketch Series, once again having more nominations than its five competitors (“At Home with Amy Sedaris,” “Documentary Now,” “Drunk History,” “I Love You, America” and “Who Is America”) combined. While “Saturday Night Live’s” nomination haul for 2019 is down from three from last year’s 21, it is hardly showing any signs of slowing down as the preeminent sketch series on television.