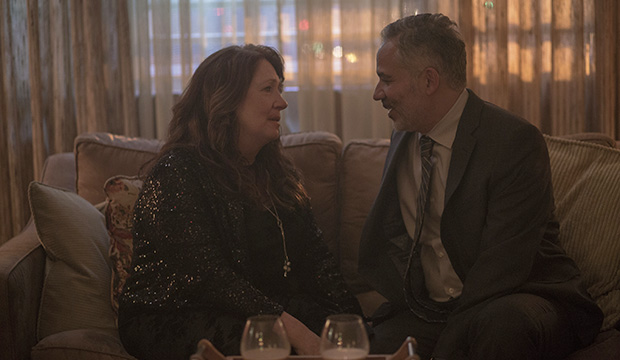 Hulu’s “The Handmaid’s Tale” received 11 Primetime Emmy Award nominations on Tuesday for its three orphaned Season 2 episodes, but it’s definitely not too early to look at its Emmy prospects next year for Season 3. In the midst of the looming onscreen resistance, the show, which returned on June 5, found a moment to explore Aunt Lydia’s backstory in the eighth episode “Unfit,” which could catapult Ann Dowd all the way into next year’s drama supporting actress lineup and back at the podium.

While Aunt Lydia has been sending chills down our spines since the moment she walked onscreen, she’s never felt like a one-note villain. Whether it’s tears bleeding down her face as she commands the handmaids to stone Janine (Madeline Brewer), or her denouncing the silencing of women to June (Elisabeth Moss), Dowd has always visibly portrayed Lydia’s inner turmoil. Aunt Lydia may be a devout Christian who believes in the majority of Gilead’s doctrine, but she primarily cares about the well-being of all children and most notably, that of her “girls.” In Lydia’s mind, handmaids can only be cleansed of their sins by becoming God-fearing people, and taking all necessary measures to achieve exactly that is the right thing to do.

This is further explored in the third season, where she’s in a precarious position after being severely injured by Emily (Alexis Bledel) in the Season 2 finale. Nevertheless, she’s back on her feet quickly, maybe too early, and more duty-bound than ever. So when Janine tells the Putnams that she could give them a second child, Lydia reacts instantly by repeatedly beating her with a taser stick, leaving even the Commanders in the room shell-shocked. Overall, in her attempt to regain trust from Gilead after not foreseeing the assault by one of her own handmaids, she’s more ruthless yet wildly inconsistent than she’s ever been.

Much of her behavior is put into perspective in “Unfit,” during which we find out her backstory. The former Lydia Clements was a teacher, already a devout Christian, and already so caring of children that she waits with her student Ryan (Ian Ho) for his mother Noelle (Emily Althaus) to pick him up from school. Soon after, she befriends the single mother, who convinces her to rejoin the dating scene. After a not-so-great previous marriage, Lydia finally seems happy when she connects with a (Christian) colleague, Jim Thorne (John Ortiz), at a New Year’s Eve party. But after he admits that their relationship is developing too quickly for him, Lydia is overtaken by shame and complete humiliation, which soon turn into malevolence. And this malevolence triggers her subsequent decision to report Noelle to the authorities and have Ryan taken away from her.

This episode is tailor-made for an Emmy submission, not only because Dowd has ample screen time, but because she’s uniformly excellent in it. There are loud, showy moments, like Lydia crying on the edge of her bathtub after Jim leaves her apartment, then smashing the mirror in agony, that are balanced out with subtle ones, like her beamingly singing along to karaoke next to her newfound partner. It’s refreshing to see Lydia with her hair down, wearing clothes that couldn’t be more different from her brown Gileadean work uniform and altogether being a recognizable person. Because let’s be honest: Her reaction to Jim asking her to join him onstage, being completely and utterly embarrassed because she can’t sing, could not be more relatable.

Dowd almost makes you feel sorry for Lydia at times, but even her smallest facial mannerisms — for instance, the abrupt flash of deprecation that crosses her face at the mention of a same-sex relationship — ultimately remind you of the woman she eventually becomes. There are no redeeming qualities to Lydia that will make up for the horrible actions she’s committed, but she was once was a well-intentioned woman who could have found happiness in life.

What also makes “Unfit” a fitting Emmy submission is the fact that Lydia has an ongoing storyline in the present timeline as well, which is largely centered around condemning June for harming her daughter with her actions. And yet again, she’s nearly injured when Ofmatthew (Ashleigh LaThrop) loses it in a supermarket and points a gun at her, after being forced to atone for not wanting to have her child. But before she can pull the trigger, she’s shot by guardians, and this time Lydia goes home unharmed.

While Dowd did receive traction for her work in the 2012 movie “Compliance,” it took until 2017 for this veteran actress to finally get her proper due. She received not one but two Emmy nominations, one in Best Drama Supporting Actress for “Handmaid’s,” which turned into an eventual win, and the other in Best Drama Guest Actress for HBO’s “The Leftovers.” Since she received a second nom for “Handmaid’s” just last year, one for Season 3 would be her fourth career bid. Yes, it’s a long . time before 2020 Emmy voting actually commences, but with other heavy-hitters like “Big Little Lies” and “Stranger Things” airing now as well, early birds might not fare badly after all. Plus, with an Emmy track record like “Handmaid’s’” and the fact that it just managed to nab 11 bids for three episodes — and her memorable character-centric episode, Dowd may not have to worry about the early release.