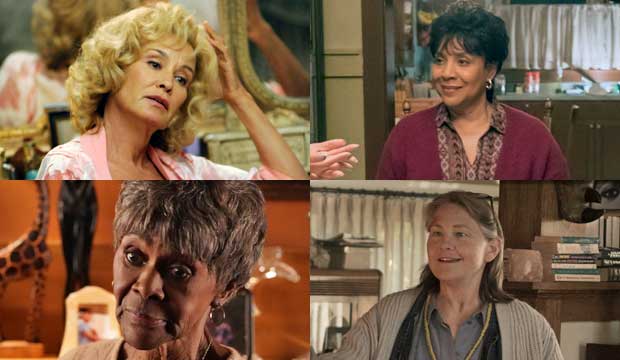 It’s not unusual for the film, television and theater worlds to overlap, but Broadway downright dominates one Emmy category this year. Not only are four nominees for Best Drama Guest Actress veterans of the Great White Way, all four of them have won Tonys for Best Actress in a Play.

The current Emmy front-runner based on the combined predictions of Gold Derby users is Phylicia Rashad for her role as Susan Kelechi Watson‘s mom on “This is Us.” She previously made history on Broadway when she won the Tony for “A Raisin in the Sun” in 2004, which made her the first black performer ever to win Best Actress in a Play. But even though Rashad is also a TV veteran, she has never actually won an award from the television academy, not even for the TV movie version of “A Raisin in the Sun” that aired a few years after her Broadway run; she was nominated for Best Movie/Mini Actress in 2008, but lost to Laura Linney for “John Adams.”

Currently ranked second in our Emmy odds is Cherry Jones (“The Handmaid’s Tale”) for playing the mother of freedom fighter June (Elisabeth Moss). She has actually won two Tonys for Best Actress in a Play, for “The Heiress” (1995) and again for “Doubt” (2005). Her second Tony win actually pitted her against Rashad, who was nominated in 2005 for her role in “Gem of the Ocean.” But unlike Rashad, Jones is already an Emmy winner: she won in 2009 for her supporting role on “24.” And this is her second straight Drama Guest Actress bid for “Handmaid’s,” so we know the TV academy admires this role.

Ranked third in our Drama Guest Actress forecasts is Jessica Lange (“American Horror Story: Apocalypse”). She’s a triple crown champ who actually won two Oscars and three Emmys before she finally set foot on the Tony Awards stage in 2016, winning Best Actress in a Play for “Long Day’s Journey Into Night.” Her current Emmy bid is actually for a role she already won an Emmy for: she claimed Best Movie/Mini Supporting Actress for “AHS” as Constance Langdon. Since the “Apocalypse” season of the FX anthology series revisited past characters and storylines, the television academy ruled that the show must compete as a drama this time, which may have been the best possible news for Lange, who didn’t have enough screentime to qualify for a nomination if “Apocalypse” had been a limited series.

SEEWhich ‘This Is Us’ actor will extend the show’s winning streak at 2019 Emmys?

Ranked fifth in our Emny odds is the last Tony champ in this category, Cicely Tyson (“How to Get Away with Murder”). The legendary performer won Best Actress in a Play in 2013 for “A Trip to Bountiful.” She already has three Emmys to her name (two for “The Autobiography of Miss Jane Pittman” and one for “Oldest Living Confederate Widow Tells All”), but this would be her first victory in 25 years. It’s not for a lack of trying: this is Tyson’s fourth nomination for playing Viola Davis‘s mom on “Murder.”

Rounding out the Emmy race for Best Drama Guest Actress are Carice van Houten (“Game of Thrones“) and Laverne Cox (“Orange is the New Black”). Do they stand a chance, or will one of the queens of Broadway take another bow?

MAKE YOUR PREDICTIONS: Who'll win Emmy for Best Drama Guest Actress?
To save your prediction, you must log in to Gold Derby. Click here to sign in with existing account -- or create a new one.
PREDICTthe Emmys now; change them until September 22