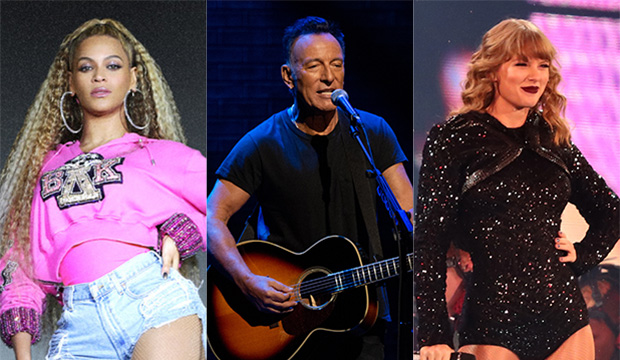 The Emmys are looking like the Grammys this year — at least in the Best Variety Special (Pre-Recorded) category. Last week, Beyonce released her concert film “Homecoming” on Netflix, giving the streaming service a third Emmy contender from a massive music star. Its first two, lest we forget, are Bruce Springsteen‘s “Springsteen on Broadway” and Taylor Swift‘s “Reputation Stadium Tour” concert film. Will this category come down to who was literally music to voters’ ears?

Of the trio — who have 53 Grammys between them — only Swift has won an Emmy before, taking home Best Original Interactive Program for “AMEX Unstaged: Taylor Swift Experience” in 2015. However, that was a juried category (YouTube’s “Emma Approved” also won), so that means Swift has yet to win a competitive Emmy race. “Reputation,” which dropped on New Year’s Eve on Netflix, is arguably the least hyped about of these three films at the moment, but Tay Tay can/will definitely shift the spotlight back to her this Friday with whatever she’s releasing (likely the first single from her new seventh studio album).

“Springsteen on Broadway,” which was released two weeks before “Reputation,” is unquestionably a major priority for Netflix. Springsteen and Martin Scorsese are booked to kick off Netflix’s FYSEE Emmy exhibition on Sunday, May 5 with a showcase for the film. The Boss’ actual show on the Great White Way was already recognized with a special Tony Award last year. (So no, if Springsteen wins the Emmy, he won’t complete his EGOT because the Tony was not competitive.) Springsteen has two previous Emmy bids for his Super Bowl halftime show in 2009 and his HBO concert special in 2001.

But right now it’s Queen Bey who has all the buzz with “Homecoming,” which documents her 2018 Coachella performances and currently carries a 100 percent score on Rotten Tomatoes and a 92 on Metacritic. Beyonce (or Beyonce Knowles-Carter, as she’s credited) also dropped an accompanying live album, “Homecoming: The Live Album,” coinciding with the film’s release last Wednesday, just like she did for “Lemonade,” for a full 360 experience because that’s how she rolls. A four-time nominee, Beyonce was last up for her 2016 HBO film “Lemonade” for directing (shared with co-director Kahlil Joseph) and the formerly named Best Variety Special, before it was split into live and pre-recorded categories last year. She lost directing to “Grease: Live”‘s Thomas Kail and Alex Rudzinski and the program race to “The Late Late Show Carpool Karaoke Primetime Special.” She could be shortlisted for the same categories again, as she also directed “Homecoming” — this time solo.

However, all three could be foiled by another music icon: Paul McCartney. The Beatle is the centerpiece of “Carpool Karaoke: When Corden Met McCartney Live From Liverpool,” a special CBS cobbled together after the tremendous popularity of McCartney’s “Carpool Karaoke” segment on “The Late Late Show with James Corden” last summer. And if there’s one thing we know, it’s that Emmy voters can’t get enough of “Carpool Karaoke.” In addition to its aforementioned 2016 win, “Carpool Karaoke Primetime Special 2017” nabbed the same prize the following year, but the franchise was beaten by “Dave Chappelle: Equanimity” last year. Don’t worry, it made up for it with a Best Short Form Variety Series win for “Carpool Karaoke: The Series.”