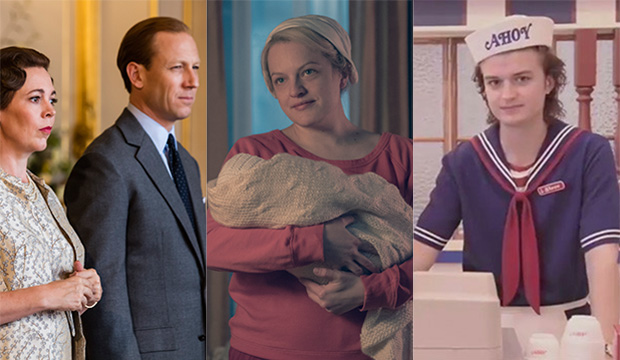 They’re dropping like flies. As Gold Derby exclusively revealed on Thursday, “The Crown” is sitting out this year’s Emmys, which means five of last year’s Best Drama Series nominees will be MIA. Only defending champ “Game of Thrones” and two-time nominee “This Is Us” are eligible to return. “The Americans” has ended, so you can’t hold that against it, but the other four are simply delayed for one reason or another, creating one of the most empty fields — especially in drama — in years. And then there’s “Big Little Lies,” which has to compete as a drama for its second season, but it’s premiering after the May 31 eligibility deadline. So whose absence are you stewing over?

“The Crown”‘s eligibility was always in question since principal production on Season 3, which sees Olivia Colman taking over the role of Queen Elizabeth II from Emmy champ Claire Foy, wrapped in late January and reshoots were still happening as recently as last week. Colman’s surprise Best Actress Oscar win for “The Favourite” intensified speculation/hope that Netflix will try to drop the first six episodes by May 31 (as it did with “Unbreakable Kimmy Schmidt” last year) to capitalize on Colman’s momentum. Colman was even in first place in our early Best Drama Actress odds before Thursday’s news. Alas, it’s looking like “The Crown,” which also won drama directing for Stephen Daldry last year, will probably drop in the last quarter again (Season 1 premiered in November 2016; Season 2, December 2017).

SEE Emmys exclusive: ‘The Crown’ will not compete for Netflix at 2019 ceremony

2017 Best Drama Series champ “The Handmaid’s Tale” made it just under the wire for last year’s Emmys — the last three episodes of Season 2 that aired last summer are eligible for this cycle — but Season 3 won’t premiere until June 5. Craig Erwich, Hulu’s SVP of originals, said at the Television Critics Association winter press tour last month that the streaming service didn’t want to rush the show in order to “maintain the incredibly high standards of storytelling that it set.” He also denied that “Handmaid’s” — which claimed eight Emmys in Season 1 but didn’t win a single award at the main ceremony for Season 2 — was trying to steer clear of the final season of “Game of Thrones.”

“You’re going to watch the final season of ‘Game of Thrones,’” he said. “We wanted to give the show as much time as possible to maintain the quality that it has.”

Season 3 of “Stranger Things,” which is set in 1985, is slated to drop on July 4, almost 21 months after Season 2 was released on Oct. 27, 2017. The delay was due to production not commencing until April 2018, and while it concluded in November, the show has a long post-production schedule thanks to all its visual effects. While “Stranger Things” has yet to win a major Emmy (it only took home sound editing last year), it snagged nominations in all the big categories its first two seasons — drama series, and in acting, directing and writing.

SEE ‘Big Little Lies’ Season 2 will premiere in June, so, yes, it will miss this year’s Emmys

“Westworld” is scheduled to start production on Season 3 later this month and will wrap in September, so it’s definitely not going to air before 2019 is out. The robo-Western had an 18-month gap between the October 2016 Season 1 debut and the April 2018 Season 2 premiere. Though it won fewer Emmys last year with “Game of Thrones” back in the mix, “Westworld” did score a big victory in Best Drama Supporting Actress for Thandie Newton.

After bagging eight Emmys in the limited series races in 2017, “Big Little Lies” must switch to drama for Season 2 (the Producers Guild of America Awards shifted it to drama last year when the renewal was announced). Since the second season, which includes Meryl Streep, filmed last spring and summer, many assumed it would premiere in time for this year’s Emmys (it’s not like it requires a lot of effects; those picture-perfect beachfront mansions are real!). But HBO announced last month that Season 2 will bow in June, with a specific date to be announced. It’s likely long-ball strategizing by the network, not wanting its two biggest contenders, the other being “Game of Thrones,” duh, going up against each other. Since “Thrones” is ending this year, HBO will still have “Big Little Lies” on the shelf to be competitive next year.