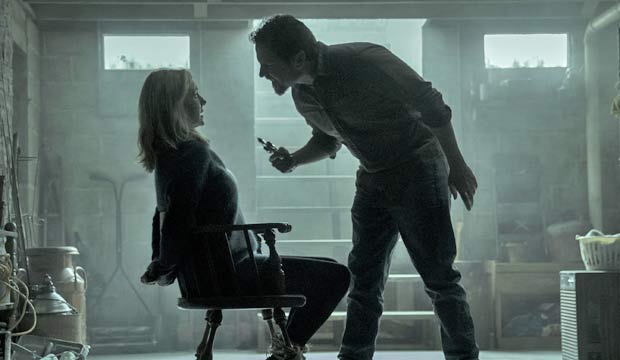 Laura Linney is up for Best Drama Actress for the first time at the Emmys for her role as Wendy Byrde, but she won four Emmys in other categories for all four roles she previously nominated for: Best Comedy Guest Actress for “Frasier” in 2004 and Best Movie/Mini Actress for “Wild Iris” in 2002, “John Adams” in 2008 and “The Big C: Hereafter” in 2013. The three-time Oscar nominee contends now for playing lobbyist Wendy Byrde in the second season of crime drama “Ozark” on Netflix.

Linney submitted the episode “One Way Out,” which was available on the academy website for voters to consider. In it, Wendy is kidnapped by pastor Mason Young (Michael Mosley), who uses her as leverage to get Marty (Jason Bateman) to retrieve Mason’s baby Zeke from police custody. Marty succeeds, but ends up killing Mason during a confrontation. He and Wendy clean up the crime scene and take in Zeke as a supposed foster child to improve their public image as they continue to try to build support for their casino project.

Will Linney win her fifth Emmy for this performance? Let’s consider the pros and cons.

Actors often win awards for playing characters in heightened situations because they’re able to show voters a wide range of emotions. “One Way Out” sees Wendy kidnapped and fighting for her life. It is a layered performance, as Linney must portray both Wendy’s inherent fear and the calmer exterior that she presents to her captor in her attempts to negotiate with him. The title comes a monologue that she delivers to the captor in which she likens his consequential decisions to those made in the Garden of Eden: “The truth is, evil comes when the righteous path is so hidden that it just looks like there’s only one way out.”

It helps Linney’s chances that “Ozark” exploded in popularity at the Emmys this year, picking up nominations like Best Drama Series in addition to Best Drama Actress that it missed for its first season last year. The editors branch of the TV academy nominated Cindy Mollo‘s work on this episode specifically, after it reaped an equivalent nomination from the American Cinema Editors. The industry has responded to “One Way Out” and so did Netflix; the only guest performance that they entered for Emmy consideration for “Ozark” was Mosley’s as the kidnapper in this episode.

“Ozark” rarely wins. It was shut out of its four categories at the Emmys last year and lost its four craft categories at the Creative Arts portion of this year’s Emmys on Sunday night. Out of 13 nominations that the second season received from the various industry guilds, only Bateman has been victorious, winning the Screen Actors Guild Award for his performance.

Unless there’s an overwhelming surplus of support for “Ozark” overall, voters may decide to take care of the show by voting for one of her co-stars. Julia Garner is the front-runner to win Best Drama Supporting Actress and Bateman is a strong contender for Best Drama Actor after his SAG win, so they may be the likeliest beneficiaries of “Ozark” support. Does admiration for “Ozark” run deep enough for it to score three acting wins simultaneously?

Best Drama Actress front-runner Sandra Oh of “Killing Eve” is helped by the narrative that she is overdue after 10 Emmy nominations without a win. Such campaigns have paid off in recent years for the likes of Henry Winkler in “Barry” and Jon Hamm in “Mad Men.” But Linney has no such claim with her near-perfect Emmy record. Under the blue-ribbon panel voting system that nullified campaigns and narratives, Linney won all but one time that she was nominated — her first nomination for “The Big C” in 2011. So is there any rush to reward her again?

Make your Emmy predictions today so that Hollywood insiders can see how their TV shows and performers are faring in our odds. You can keep changing your predictions as often as you like until just before winners are announced on September 22. And join in the fun debate over the 2019 Emmys taking place right now with Hollywood insiders in our television forums. Read more entertainment news.