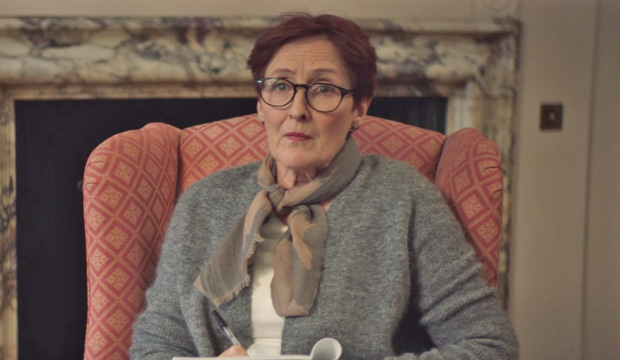 Irish character actress and Tony nominee (“Medea,” 2003) Fiona Shaw earned her first Emmy nomination this year … twice! She paired her Best Drama Supporting Actress nomination for “Killing Eve” with another for Best Comedy Guest Actress in “Fleabag,” where she plays the counsellor to lead actress Phoebe Waller-Bridge‘s Fleabag in one pivotal and hilariously dry therapy session in “Episode 2.”

The scene arrives early on in Season 2 when Fleabag is wrestling with her newfound sexual attraction to the priest (Andrew Scott) and has taken a gift certificate for counseling intended for her sister in the hopes that she might find some clarity in her own life and/or receive a cash voucher for the session instead.

While Shaw only appears this one time in the series, the scene stands out as a rare tête-à-tête between the always-relying-on-comedy Fleabag with Shaw’s straight-shooting, no humor allowed therapist. Shaw plays the counsellor with a stern, humorless countenance that throws Fleabag off her game and challenges her tendency to use jokes as a crutch, creating a character in a very short time that has depth, range and a wealth of possible backstories to imagine for her.

Is “Episode 2” Shaw’s ticket to an Emmy win on her first nomination or is being a double nominee the win in itself? Let’s look at the pros and cons of her chances.

Earning raves and a ton of support in its second season, “Fleabag” is enjoying the benefits of a buzz effect right now. Voters will be flocking to the series to see what all the fuss is about and are probably pleasantly surprised by how short it is. Shaw’s role is small, but memorable for how off-kilter it is in comparison to the rest of the show.

As a double nominee, Shaw is an actor that voters are truly gravitating toward right now. Both of her shows killed it with acclaimed second seasons and while her part in “Fleabag” is smaller than it is in “Killing Eve,” this is a chance to reward her entire year if voters decide they want to recognize someone else (like one of the “Game of Thrones” gals) in Shaw’s other category, Drama Supporting Actress.

Shaw appears only once and while percentage-wise that’s decent for a series with only six episodes a season, her character isn’t integrated into the overall narrative like many of the other contenders. The scene is fantastic and could easily be stripped from the story and stand on its own, but the counsellor certainly isn’t the first character that pops into a voter’s mind when they think about “Fleabag.”

The upside of the shower of love for “Fleabag” is opposed on the other end by there being plenty of chances for voters to recognize the show. For Shaw that is a most pressing issue because she contends against co-star Kristin Scott Thomas who is an Oscar nominee for “The English Patient” (1996). If anyone is to succumb to vote-splitting, I hate to say that it’s likely to be Shaw in this field.