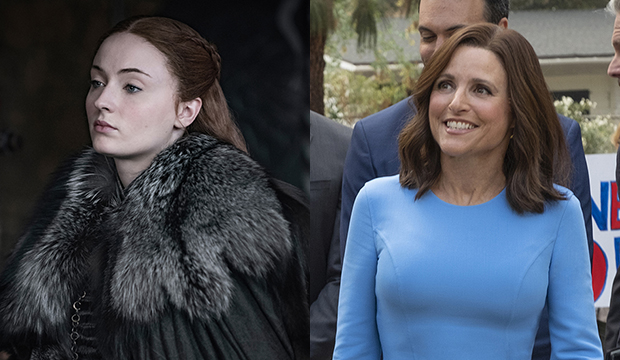 There is a lot of uncertainty in this year’s Emmy race, with so many shows sitting out and others’ eligibility still up in the air, but there are two things most people agree on: “Game of Thrones” will win Best Drama Series for its final season and Julia Louis-Dreyfus will win Best Comedy Actress for the final season of “Veep.” Both are way out in front in their respective races, with “Thrones” holding a 5/1 lead in our odds and Louis-Dreyfus at 71/20. But which of these frontrunners is tougher to take down?

The most decorated scripted series in Emmy history, “Thrones” has a record 47 wins, including three Best Drama Series victories under its belt. A fourth would tie it with record holders “Hill Street Blues,” “L.A. Law,” “The West Wing” and “Mad Men.” The pop culture behemoth’s final season is airing at the perfect time — its usual time — in the spring, but as we saw last year, when it claimed the top prize a year after Season 7 aired, it’s so popular it probably doesn’t matter when it airs. Plus, the Best Drama Series field is depleted this year, with only “Thrones,” “This Is Us” and maybe “The Crown” as the eligible returning nominees. And quite frankly, none of the first-year shows is a breakout smash that would be strong enough to dethrone (no pun intended) it.

After sitting out 2018 due to her breast cancer treatment, Louis-Dreyfus is back and attempting to extend her own record for the most wins for a single performance; this would be her seventh Best Comedy Actress Emmy for “Veep.” Unlike “Thrones,” Louis-Dreyfus has never lost for “Veep,” so she could be a perfect 7/7 for playing Selina Meyer — unheard of for a performer on a multi-season show. It would also be Louis-Dreyfus’ record-breaking ninth acting Emmy overall, counting her wins for “Seinfeld” and “The New Adventures of Old Christine,” breaking her tie with Cloris Leachman.

However, during “Veep”‘s absence, a new Emmy darling emerged: “The Marvelous Mrs. Maisel.” The Amazon series nabbed eight Emmys last year, including victories for Best Comedy Series and star Rachel Brosnahan. In January, Brosnahan won her second straight Golden Globe and Critics’ Choice Awards, and the show went 3 for 3 at the Screen Actors Guild Awards. Since “Veep” doesn’t return until March 31, Brosnahan and Louis-Dreyfus have yet to face off anywhere. Can Brosnahan hold onto her crown or will JLD reclaim her Emmy throne like we all expect?