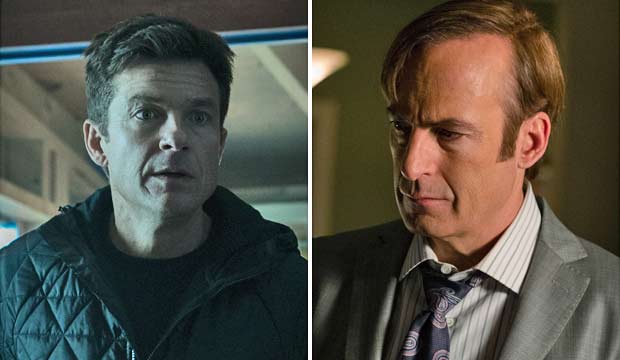 The door is wide open at the Emmys in the race for Best Drama Actor. Last year’s winner, Matthew Rhys (“The Americans”), is off the air since his show concluded, so who will rise up to fill that void? There’s no clear consensus. The top two contenders are Jason Bateman (“Ozark”) and Bob Odenkirk (“Better Call Saul”), according to our racetrack odds, but it’s so close that the Expert journalists we’ve polled thus far are split right down the middle.

“Ozark” has exceeded our awards expectations ever since it began, including five Emmy noms in 2018 (including two for Bateman as an actor and director) and four SAG Award nominations in 2019 (including a win for Bateman). With two other Netflix heavy-hitters, “Stranger Things” and “The Crown,” sitting out this Emmy cycle, the crime drama might be well positioned to pick up the slack for the streaming service.

But “Better Call Saul” has been waiting patiently for its turn in the winner’s circle, so it might be able to stop “Ozark” from cutting in line. Odenkirk currently ranks second overall with 9/2 odds, but he too has support from five Experts: Joyce Eng (Gold Derby), Matthew Jabocs (Huffington Post), Kelly Lawler (USA Today), Kaitlin Thomas (TVGuide.com) and Ben Travers (IndieWire).

This is the fourth season for “Saul” in the Emmy race, and of course voters are already well acquainted with its main character, whom Odenkirk also played on “Breaking Bad.” But “Saul” still hasn’t won a single Emmy despite 23 nominations, including three in a row for Best Drama Series (2015-2017). So is the show still on the rise, or might it start to wane before it makes its long-awaited breakthrough.

Meanwhile, there are another five Experts who don’t think either Bateman or Odenkirk will win. Thelma Adams (Gold Derby) and Anne Thompson (IndieWire) are betting on Kit Harington (“Game of Thrones“). Debbie Day (Rotten Tomatoes) is going with Brian Cox (“Succession”). Robert Rorke (New York Post) thinks Richard Madden (“Bodyguard”) has the edge. And Matt Roush (TV Guide Magazine) says Sterling K. Brown (“This is Us”) will win again after his 2017 victory.

So it looks like this is one of the year’s most unpredictable categories. Which way do you think it’ll go? 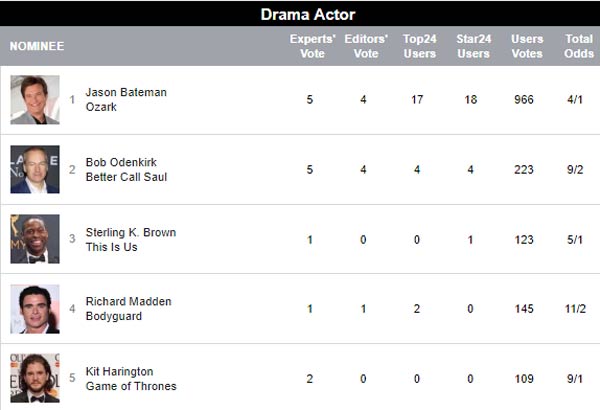