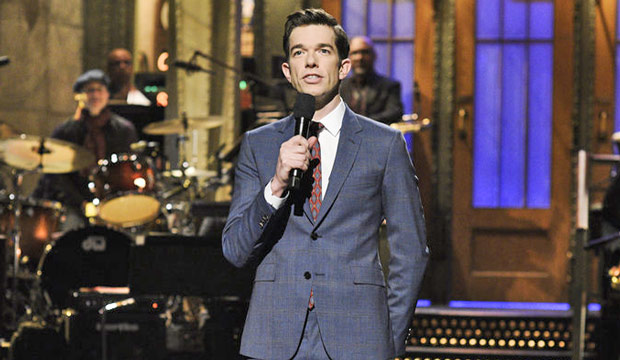 John Mulaney is on a roll, having now hosted two heavily praised episodes of “Saturday Night Live.” The former head writer of “SNL,” Mulaney proved to be an adept performer upon hosting his first episode in 2018, and his 2019 stint was no different. The comedian is now nominated at the Emmys for Best Comedy Guest Actor, his first bid as a performer. Before 2019, Mulaney had 12 nominations and two wins, and he just received four bids in multiple categories. In addition to Comedy Guest Actor he is competing in Best Original Music and Lyrics for “Documentary Now” and Best Variety Series Writing for both “Saturday Night Live” and “Documentary Now.” All this goodwill may just lead to the multi-hyphenate earning his first Emmy for acting.

Mulaney shows off every facet of his skills as a performer in his 2019 episode. He performs a mini standup set for his monologue, which covers all of his trademark idiosyncratic observations, most notably the similarities between old police sirens and the sound of a dying gay cat. Memorable sketches include “What’s That Name,” in which he fails to guess the name of his best friend’s girlfriend and “To Have and Have Not,” where Mulaney plays the straight man to Kate McKinnon as Lauren Bacall, who finds herself unable to properly whistle.

The one everyone was talking about, though, was “Bodega Bathroom,” comparable in concept to last year’s weirdly brilliant “Diner Lobster.” The sketch features Mulaney and company singing about the dangers of a bodega bathroom, getting more and more absurd with each passing minute. Can Mulaney win another Emmy this year? Let’s take a look at the pros and cons.

Mulaney is clearly a well-liked figure, not only in the comedy world but among Emmy voters. Sixteen nominations in just 11 years is proof the TV academy is on the same wavelength as the comedian’s peculiar sensibility. He just won last year in Best Variety Special Writing, beating the likes of Patton Oswalt, Michelle Wolf, Steve Martin & Martin Short and the team from “Full Frontal with Samantha Bee.” If voters are still on a Mulaney kick, he could very easily take Best Comedy Guest Actor, which has been very friendly to “SNL” hosts over the years, winning five of the last 10 races.

It helps that Mulaney has one of the most loved episodes of “SNL” this season, with some rating it at the very top. There is such a wide range of comedic material throughout the episode that voters might be impressed with it on merit alone, on top of his popularity in the industry.

Mulaney has a lot of internal competition in Best Comedy Guest Actor. He is not just competing against one “SNL” guest star. He’s up against three. Matt Damon, Robert De Niro and Adam Sandler could all take votes away from Mulaney among the biggest “SNL” fans in the academy. All three of those guest stars had notable moments this season, from Damon playing Brett Kavanaugh, De Niro recurring as Robert Mueller and Sandler’s poignant tribute to the late Chris Farley. Other than the “Bodega Bathroom” sketch, Mulaney arguably didn’t have the same level of mainstream buzz, no matter how loved his episode ended up being.

Also, for as many fans there are of Mulaney’s sensibility in the academy, there could be some who simply don’t get him. His style can be deadpan and not quite as broadly comedic as others. Comedy is so subjective that it can be hard to tell what voters will value.