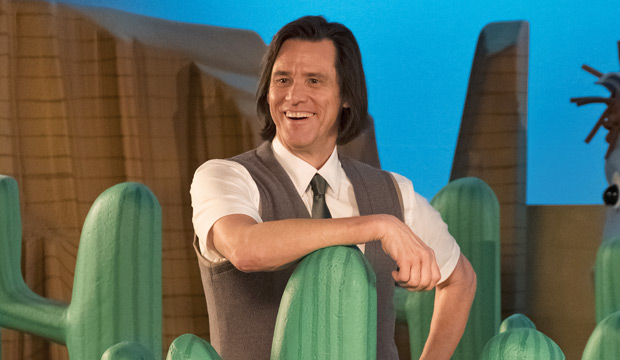 Jim Carrey is nothing if not unpredictable, and while few were surprised to learn the king of slapstick comedy films had decided to foray into television like many other Hollywood stars, some were shocked by the poignancy and depth of his latest role as Jeff Piccirillo, aka Mr. Pickles, in the Showtime comedy “Kidding.” As Mr. Pickles, Carrey plays the beloved host of a children’s series whose personal life is turned upside down following a tragic event that takes the life of his son.

In “Kidding,” Carrey teams up with director and executive producer Michael Gondry, who he previously worked with on the acclaimed film “Eternal Sunshine of the Spotless Mind.” The casting is nothing short of brilliant with Frank Langella, Catherine Keener, Judy Greer and Justin Kirk filling out the ensemble of complex, conflicted characters. But it is Carrey, of course, who leads the way as the sad clown behind the make-up in this sometimes hilarious, often-times downright depressing tale of loss, conflict and resurgence.

Carrey’s character is determined to change the direction of the “Mr. Pickles” television show in hopes of engaging children in more serious topics such as death and loss. His father and producer of the fictional show, played by Langella, is adamant that they stick with the lighthearted formula that made it a hit. It’s a trajectory Carrey was likely familiar with as he went through a similar career renaissance more than 20 years ago. Known for comedies such as “Ace Ventura: Pet Detective” and “Dumb and Dumber,” Carrey took a risk in delving into more serious characters in films like “The Truman Show” and “Man on the Moon,” each of which won him Golden Globe awards. While producers wanted more of the same from the comedian, he pushed the envelope and risked box office success for higher art.

It is those latter films mentioned that more closely match the formula of “Kidding,” and the result is a fascinating portrayal of someone who appears happy, but is secretly in a downward spiral of depression and desperation. Jeff Pickles is a character hoping to salvage the relationship he has with his living son, win back his ex-wife and make the world a better place despite not fully understanding how. The most impressive banter is often between Carrey and Keener, who plays Jeff Pickles’ sister Deirdre, and who struggles with her own issues yet maintains a unique bond with Jeff.

Critical response to “Kidding” was generally positive following its debut last September. It is currently certified fresh on Rotten Tomatoes with a score of 76% and has a score of 68/100 on Metacritic. Tim Goodwin of “The Hollywood Reporter” calls it “Showtime’s best and most binge-worthy series in a long time,” while Verne Gay of “Newsday” writes that the show “improves as it goes along.” It was nominated for Best Comedy Series and Best Comedy Actor at the 2019 Golden Globes, but was bested by “The Kominsky Method” and Michael Douglas, respectively. Are Emmy nominations next?